Costa Rica Entertainment News – The ACAM Awards will be given out on Wednesday, at the Eugene O’Neill Theatre. This event in San Jose, Costa Rica is to include 107 nominees over 28 categories. They include just about every musical genre in existence. 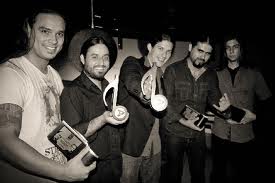 The ACAM is the Asociación de Compositores y Autores Musicales de Costa Rica , the association of composers and musical authors in Costa Rica.

This tenth edition of the ACAM Awards will feature the vocalist Luis Montalbert-Smith. He will host both sessions of the gala. The first group has the more “out there” categories, like electroacoustic, religious, punk and ska.

The second half features awards for new songs, pop, roots and progressive rock, among other more popular genres. Four artists will perform live at the event, including 424 and Rabath Caribbean Expression.

There will be five judges on the jury. They have tried to pick songs that met the requirements, such as that they are original works by Costa Rican artists operating in Costa Rica.

They’ve examined over 200 discs. The only award that has an economic benefit is the Reca Mora award.

Getting Drunk in Costa Rica on the Local’s Choice; Cacique Guaro

They’re Coming; Searching for the Poltergeist of Marysville