Costa Rica News – A week filled with showing the greatness of the Costa Rican government officials.  First, Laura Chinchilla is getting investigated for flying on a suspected drug trafficking jet. Now the director of Costa Rica’s version of the CIA gets arrested for suspected drunk driving at 7:20 pm on Sunday. We all know Sunday is the national day of drinking until passing out in Costa Rica. 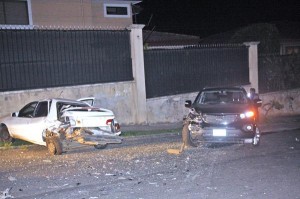 Municipal Police Officers arrested on Sunday night in Escazu the deputy director of the Directorate of Intelligence and Security (DIS) (Costa Rica’s version of the CIA), JorgeTorres, after he was involved in a violent collision with another vehicle   He refused to be take the breathalyzer test at the scene of the accident.

The crash occurred at 7:20 pm, at Santa Teresa de San Antonio de Escazu. Torres’ 2012 Kia Cerato 2011 rear-ended a parked 1944 Hyundai Elantra.  We are not talking about a little fender bender where a little paint was exchanged. Take a look at the picture.

According to witnesses the driver of the Kia Cerato seemed like he was drunk.

A breathalyzer was performed on the driver of the Elantra and it came out negative.

Torres remained on scene in the police vehicle for over and hour before he was transferred to a place where they could give him a blood alcohol test.  Those results are still being processed.

Torres’ wife who was at the scene said that Torres had suffered a preinfarto, otherwise known as the before symptoms of a heat attack. Th Red Cross did did not feel a need to treat any of the people involved with the accident.

Now let’s have some fun with this story and give a hypothesis of the ending results.

The results of the blood test will likely come back negative and the accident will be accounted to Jorge Torres’ before heart attack symptoms.  Interesting, so the treatment for someone having symptoms of a heat attack is to sit them in the back of a police car for an hour.

From now on Costa Rica if you get pulled over or have an accident fake a heart attack, refuse a breathalyzer, and delay the blood test.  If the police say anything, just tell them the CIA director of Costa Rica used this excuse.

It should be the goal of every child in Costa Rica to become a part of the Costa Rican governmental hierarchy. You get a license to steal, lie and disobey laws. Reach for the stars kids…….