Costa Rica News – This is probably one of the biggest factors that allow airlines offering flights to Costa Rica to be able to keep their fares low. 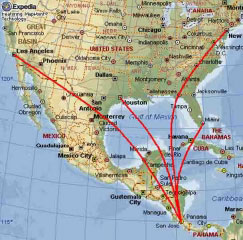 Costa Rica’s public and private tourism sectors agree that to attract airlines and travelers to the country it is essential to have an exemption of the fuel tax.

This is absolutely necessary to remain competitive.

The country exonerated ¢128,501 million of the fuel tax on passenger and cargo airlines in the last five years, according to the Ministry of Finance. That’s equivalent to $226 million, at the current exchange rate.

According to the Deputy Minister of Revenue, in 2016 the exemption reached ¢30,182 million.

The annual exonerated amount grew by 27% from 2011 to last year, in nominal terms. 67 airlines receive the exemption.