Costa Rica News – I know that it is innocent until proven guilty or at least supposed to be but it seems that if you work in high level government positions you have access to enough funds to send all your children to Ivy League schools.  Did the president of the Costa Rica Social Security Fund do what he was arrested for? We will have to wait for the trial to find out. 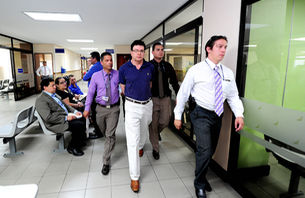 Eliseo Vargas Garcia, the president of the Costa Rican Social Security Fund (CCSS) has been arrested. The arrest took place yesterday in a hotel parking lot in Uruca after a racquetball game.

The OIJ made the arrest on the basis of an order by the Criminal Court of Goicoechea. Vargas is a 60 year old pediatrician who was sentenced to four years in prison on May 21, 2012, on five counts of embezzlement. When he was president of the fund he allegedly appointed an advisor who never held office but got a salary. On Friday, the sentence became final, when the Third Chamber of the Supreme Court rejected his appeal.

His attorney, Adrian Bonilla Juncos, was very surprised at the arrest because he was not notified of a warrant. “What they are doing with Eliseo is an outrage,” he said. Bonilla explained that there is only one thing left to try in order to get his client out of jail but that process has been delayed and “will be managed as soon as possible.”

When studying the case he saw that there was no error, it was a horror. He explained that “the law governing the actions of the chief executive of the box does not give him the power to make appointments.” He says that Renato Soto was appointed as advisor by someone other than Vargas and that he will get a copy of the action to prove it. Bonilla concluded, “In other words, Eliseo Vargas is imprisoned for a crime he did not commit.”

Mark Zuckerberg; U.S. Government Is a ‘Threat’ to Internet Security