Costa Rica Sports News – Costa Rica already has a daunting task being put into t a group with Italy, England and Uruguay.  The road just got a little tougher as they lost one of their top stars Bryan Oviedo. 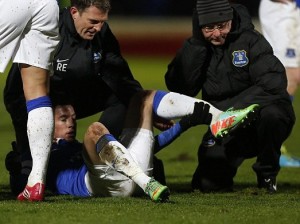 Costa Rica defender Bryan Oviedo could miss the World Cup in Brazil in June after suffering a double fracture of his left leg in Everton’s 4-0 English FA Cup fourth round win at third tier Stevenage on Saturday.

The 23-year-old was injured while attempting to tackle Stevenage midfielder Simon Heslop early in the first half.

“Medical staff have confirmed the defender has broken his tibia and fibula in his left leg,” the club said on their website (www.evertonfc.com).

“Oviedo will remain in hospital over the weekend and have an operation on Monday.”

The player has been capped 26 times by his country and was almost certain to be named in the squad for the World Cup where Costa Rica will play Italy, England and Uruguay in Group D.

The injury visibly upset some Everton players and manager Roberto Martinez said Oviedo’s absence in the next few months would be a blow.

“A real negative today is the unfortunate incident and we need to give Bryan as much support as we can now,” Spaniard Martinez told BT Sport.

“He’s had a terrific season and I’ve been very impressed with him. He’s an important player in the group and he deserves a speedy recovery.

“We always looked a threat on the counter and a threat in front of goal. It was as good as it gets really in terms of a performance,” added Martinez.

“It was a good cup tie but the injury to Bryan affected everyone. Those type of injuries leave a sick taste.”

Children and the Beginner’s Mind

Baby Born on Sled in Philadelphia