Costa Rica News – Being that I played lacrosse in college it is exciting for me to report about a lacrosse game being played here in Costa Rica.  I know that many of my readers will not know what lacrosse is since it is a sport that’s ancestry is from the native American Indians.

I could go into rules and how it is played but most likely it would either bore or confuse most people.  The best way I know how do describe it which is how we explained it in college is ice hockey on grass and in the air.  The game is played with 9 field players and a goalie on each team and you get to hit each other with up to six foot long poles know as lacrosse sticks.  Lacrosse combines elements of basketball, soccer, and hockey for a fast-paced contact sport enjoyed by many.

The video below will give you a brief intro to the game.

The Costa Rica national lacrosse team will play December 9th, starting at 9am. They will be playing against the official Philippines lacrosse team for the first time. The game will take place in the Labrador Stadium in Coronado. The tickets 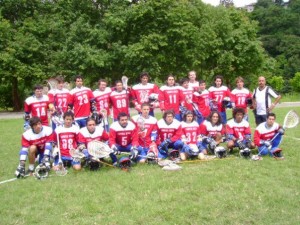 are being sold for 2000 colones each. All the earnings collected from the tickets will go to paying the expenses of this specific game.

This is the second time this year they will be playing against an international team. In June the Costa Rica Lacrosse Team played against Princeton University, a perennial powerhouse in lacrosse on the college ranks.

On December 22nd they will have an activity with a Canadian lacrosse team named the Adanac’s in the Colegio de Farmaceuticos. The activity consists of them giving the Costa Rican National Team a clinic.

The Costa Rican lacrosse team practices on the weekends, usually on Sundays, for four hours, beginning around 8 or 9am. They are in charge of practicing on our their from Monday to Friday. They are the only and official fully formed lacrosse team in Costa Rica. It consists of about 50 people, and are made up of 3 teams, one in Cartago, one in Coronado, and one in San Pedro. There are a few smaller teams in Guanacaste , but they aren’t official teams yet.

If you are interested in finding out more information about the game or playing lacrosse in Costa Rica go to their facebook event page found here. http://www.facebook.com/events/400163406722636/?fref=ts

Only in Costa Rica for Week of Nov 26th

The ‘Wide Open and Unregulated’ Marketing of Vaginal Cosmetic Surgery