Costa Rica Sports News – Costa Rica and Greece are set to clash in a match that no one expected to happen before the World Cup’s commencement. Many believed that the Costa Ricans would be the ‘whipping boys’ of Group D, but the Ticos proved everyone wrong and finished on top of the table by eliminating the likes of Italy and England and leaving Uruguay behind. 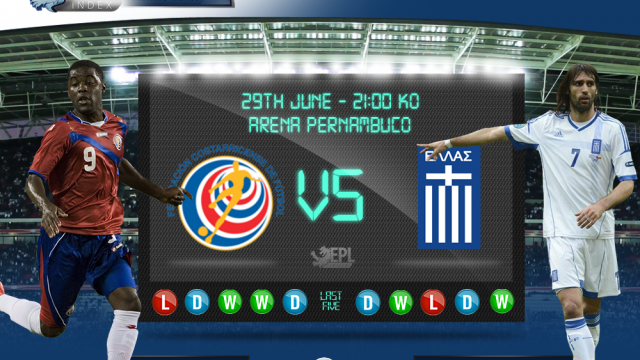 Manager Jorge Luis Pinto is not expected to make may changes in the starting line-up and much will be expected from Arsenal forward Joel Campbell, who will be playing against quite a few of his former Olympiakos teammates, and former Fulham forward Bryan Ruiz.

Greece made it through after a last minute penalty shot by former Celtic star Giorgos Samaras which boosted their morale to great heights. Manager Fernando Santos is expected to feature the same offence with Samaras up front and Bologna’s Lazaros Christodoulopoulos as well as PAOK’s Dimtris Salpingidis on the wings.

Udinese goalkeeper Orestis Karnezis suffered an injury during the National’s match against Ivory Coast but is expected to be fit for Sunday; however Bologna attacking midfielder Panagiotis Kone, who also limped out in the first half, is considered as a serious doubt for this match.  Captain Kostas Katsouranis, who was suspended on Tuesday, is quite possibly being replaced by Greece’s most capped player Giorgos Karagounis yet again.

Those two sides have never faced each other before

This is the first time ever those two teams will square off.

Greece picked up their second World Cup victory ever last Tuesday. The Greeks have only beaten African teams in this competition.

Andreas Samaris became the first ever midfielder to score for Greece in the World Cup.

The National advanced to the World Cup’s Round of 16 for the first time in their entire history.

Last time Costa Rica made it to the second round was in 1990.

The Ticos have scored in seven out of eight World Cup matches against European teams – the only side that escaped was England last Tuesday.

Child Like Suarez Says He Did Not Bite; “He Lost Balance” (Video)