Costa Rica News – Using bicycles to produce energy was a genius idea. The first well known bici-generator in Costa Rica was in the Plaza de la Democracia. Pedaling the bike was used to power dance music. 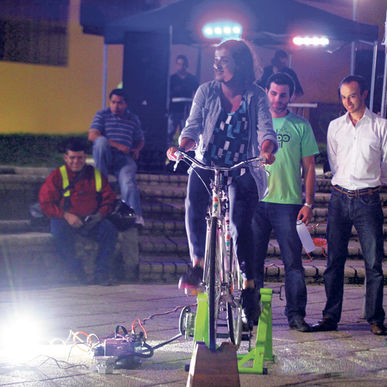 One community in Desamparados is also using the idea of moving their legs to produce fuel. In this case, the purpose or end goal is to illuminate a street.

Indigenous areas are using solar power to give them light, allowing them to study or do other activities after sunset and a day of work.

This form of adapting generators to bicycles made from used parts is a great way to recycle, exercise, produce energy without carbon emissions.

The electricity is generated from electromagnetism.

Children are especially interested in trying the stationary bikes. They line up to produce energy while playing-what a concept!

There are so many communities around the world and even in this country without power, so this idea can be a life changer.

The Top 9 Reasons To Visit Uvita in Costa Rica