Costa Rica News – The President of Costa Rica believes a new era of bilateral trade and cooperation with the UAE will help it develop initiatives across the GCC in the coming years. 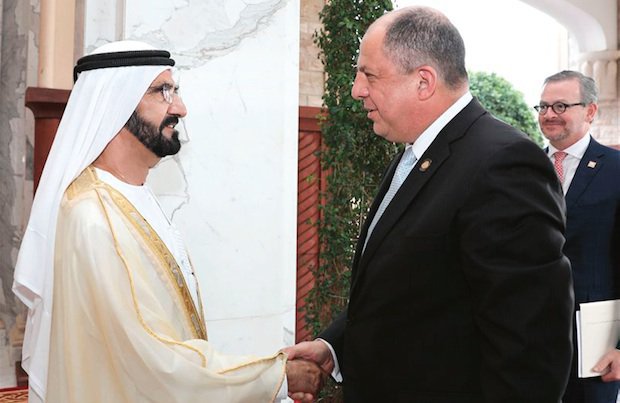 During a visit to Dubai, Luis Guillermo Solís Rivera announced the launch of a new embassy in the emirate – due to open in the first half of the year – as well as a representative trade office, which he believes will provide a stronger platform for Costa Rica’s participation at Expo 2020, as well as growth into the region.

“I think the time is right,” the President said during a press briefing at the Dubai Chamber of Commerce and Industry.

“We have had little experience in this part of the world and it took us more time than other countries, but we’re finally here.

“We also eliminated visas for nationals of the UAE and Costa Rica to be able to move more swiftly from one country to the other, and I think that the context is complete now and we will be able to participate in the world fair in a different condition.”

He said that the Central American nation would “use the UAE as a platform for expanding” across the GCC, viewing it as a “launching point for other initiatives in the region”.

A key aspect of this, he said, would be Costa Rica’s participation in Expo 2020, which will allow the country to showcase its strengths and achievements.

“The decision to be at the expo makes a lot of sense because in opening and strengthening our presence in the UAE, not being at the congress would be a terrible loss of an opportunity to be present and to show the country.

“We are a small nation that has made some very fundamental achievements – in energy, production, the use of our natural resources, the development of tourism. So my hope is that being at Expo 2020, we will be able to be more obvious and show what the country is capable of offering.”