Costa Rica News – Officials in Costa Rica have reportedly ordered the temporary closure of a pineapple farm belonging to Pineco, a subsidiary of US multinational Fresh Del Monte Produce, over concerns about the safeguarding of nearby wetlands and a Unesco World Heritage site. 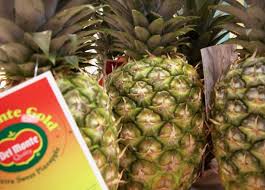 The move follows a recent inspection conducted by officials from the country’s Ministry of Environment and Energy, the National Environmental Technical Secretariat (Setena), the National System of Conservation Areas (Sinac) and the Costa Rican Center of Science and Culture, known locally as the Museo Nacional.

According to a report in the Tico Times, the inspectors concluded that the farm was too close to areas including the Térraba Sierpe wetland and four Unesco-protected archaeological sites.

According another national newspaper, La Nación, Pindeco has been asked to reconfigure its plans to develop the Osa area.

Del Monte director Luis Gómez told that publication that the enforced closure was a “surprise”.

“The resolution doesn’t say any more than the environmental viability [report] said. That’s why the announcement took us by surprise,” he commented. “Even Setena and the Museo Nacional have taken part in the process with us, and what is happening now is strange to us.”

He added: “A company like Del Monte would never think of violating legal principles. We signed a sworn declaration when they gave us the environmental permits and we adhere to that. I want to emphasise that it’s false to say we would plant in the wetlands and disrespect the heritage site.”

Pineapple production in Costa Rica attracted controversy in recent weeks after the country’s Ministry of Agriculture and Livestock banned the use of the commercial herbicide bromacil, which is said to have prompted demonstrations in the capital San José against Osa and its alleged impact on the protected sites.