Costa Rica News – Well the Costa Rican population is going to be happy since they are sending around petitions to stop the construction of this refinery in Costa Rica, but the real question is will this signal the end or just a delay? 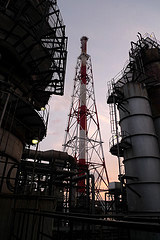 A feasibility study on the refinery modernization was conducted by Chinese company HQCEC, which has ties to China National Petroleum Corp., or CNPC, the comptroller general’s office said yesterday in a statement on its website. The terms of the contract specified that the study couldn’t be carried out by a company associated with CNPC, which is partnering with the Costa Rican state oil company, or Recope, on the project, the comptroller general’s office said. Calls and e-mails to CNPC spokesmen in Beijing weren’t immediately returned.

“Due to an investigation, the comptroller general’s office determined the breach of a clause 5.02, signed by Recope and CNPCI International Ltd,” according to the statement. “The company that conducted the feasibility study has a relationship with the Chinese state oil company, which is prohibited and a breach of contract.”

The project, in the city of Limon on the Caribbean coast, was the subject of talks between Chinese President Xi Jinping and President Laura Chinchilla during a visit by Xi to the country earlier this month. The modernization was to be primarily funded by a $900 million loan from China Development Bank Corp.

Recope President Jorge Villalobos Clare resigned following the decision, newspaper La Nacion reported. Interesting that the President of Recope resigned after this descision don’t you think? Perhaps he already got his payoff and knew that this would mean he had to give it back. I guess he thinks we are all really stupid to think that he just decided to resign from one of the top positions in Costa Rica.

Hmmmmm? Wonder why the CR government and Recope want this so bad…..can you say CHORIZO!!!!!

A revised plan for the refinery’s modernization, which targeted an increase in fuel production to 65,000 barrels per day from the current rate of 18,000, will be prepared within six months, Recope said in a statement.

10 Commandments of Traveling in Summer