Costa Rica Sports News – More than a month removed from electrifying football fans around the globe by way of its World Cup performances, Costa Rica returned to training Monday with thoughts of repeating as Copa Centroamericana champion. 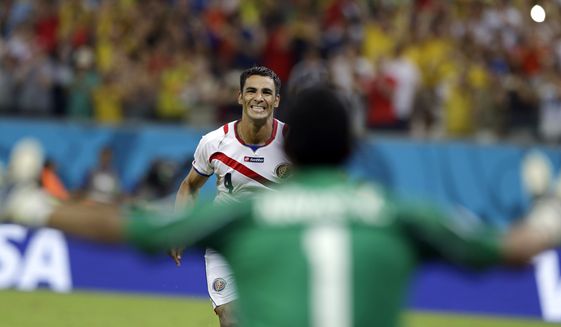 “Seeing the group today fills me with satisfaction and makes me very happy because just as we had a great team in Brazil, I realize that there is talent in Costa Rica and potential to continue doing great things for our country,” said defender Michael Umaña, 32, who played in four of the five World Cup matches. “Rather than working with pressure, now comes the great challenge to keep growing after what was accomplished.”

After reaching the quarterfinals in Brazil, where it was eliminated by the Netherlands on penalty kicks, the Costa Ricans are looking to launch a new era. Exceeding expectations at a single competition – no matter how important — is one thing, sustaining success and expanding a program is a different matter.

“It’s a big challenge, more so after what was done in Brazil, but I think today we start to write a new episode in this story,” commented new squad member James Scott of Cartagines. “The team is committed to working hard in order to represent the country in the best possible way.”

Wanchope, a Costa Rican football legend in his own right as a player, was an assistant under Pinto. He has his own ideas to instill and objectives to achieve.

“The entire world saw the performance that was produced in the World Cup,” said the 38-year-old. “I think all the teams will give everything against Costa Rica and not want to lose, making our life impossible.”

Costa Rica will begin pursuit of its eighth Copa Centroamericana crown on September 3, when it meets Nicaragua at Robert F. Kennedy Memorial Stadium in Washington, D.C.

Update on Intel in Costa Rica