Costa Rica Soccer Should Not Get a Redo!

Costa Rica News – This article is going to anger a lot of Costa Ricans as learning to lose is not a true trait of many people in the culture.  The Costa Rican men’s soccer team is going to FIFA to ask for a replay of Friday’s World Cup qualifying 1-0 loss to the United States, because it was snowing really hard. 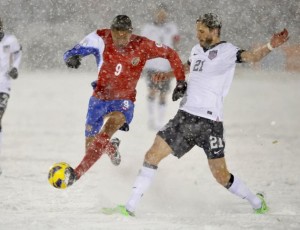 The two teams played in Commerce City, Colorado, and as we chronicled yesterday, they played under blizzard conditions. It was cold as shit. Snow caked the ground. The sides had to use a bright yellow ball, and even that was difficult to see as the game progressed. The nightmarish conditions were among the worse anyone has ever played in.

“I asked them to stop. They should suspend the ref,” Costa Rican manager Jorge Luis Pinto told reporters. “It was an embarrassment. It was an insult to Costa Rica and people coming in here.”

He’s right, of course. Everything Pinto is saying is correct. Costa Rica asked to postpone the game at halftime, and again ten minutes into the second half. The game was an embarrassment. No one is arguing these facts.

The conditions they’re decrying were equally bad for both teams. Not as bad as this, but still bad. On another day, Costa Rica could’ve drawn or even bested an undermanned USMNT side that was missing eight players to injury, and whose locker room was in a state of chaos. Would Pinto have complained then?

We get it. It’s the final round of the 2014 World Cup Qualifiers. You really want to win. The match probably could’ve and should’ve been postponed.

“Honestly, it was robbery, a disgrace. I’ve never played a game in these conditions,” Costa Rican midfielder Cristian Bolanos said after the game. “You couldn’t see the ball … if we had played without snow, we would have won, I am sure.”

If you had won or tied would you be asking for a replay of the game? The answer is NO! Both teams played in the same conditions and you came out on the losing end.  Move on and beat your next opponent.

I like the concept of equal *potential* for success at anything in human life. When people are putting a bad rap on Costa Ricans I will regularly try to analyze the factual basis for any assertions and most of the time I’ll end up defending what Costa Ricans are accused of because all other nationalities and cultures are usually equally guilty. HOWEVER, this time I’m sticking with those who feel the team from C.R. should NOT be requesting a replay of the game. I’m going to try to limit my reasons because I can think of so many:

1. The last time I was on a team where a “do over” was requested was when I was in the 5th grade in elementary school. These top teams playing FIFA level football should show the top level athletic achievement they have attained and play through whatever game conditions exist.
2. The C.R. team manager stated “They should suspend the ref.” Actually, maybe it should be considered that the manager should be suspended. He is apparently trying to cover up for his inadequate preparation of his team. He knew the game was to be held at the elevation of 1,574 meters (5,164 feet) in the Rocky Mountains of North America where, just like in the central highlands of C.R., weather can change quickly and a clear sky can turn dark very quickly and produce storm conditions. He should have been aware of the numerous cold weather storms that have hit Colorado, U.S.A. and surrounding states this season because that part of the world is well within the influence of the Arctic Jet Stream. I noticed that the rainy season has begun about one month early in Costa Rica this year. Just because Spring was beginning in the U.S.A. did not mean there would not be inclement weather at game time. Maybe the manager should have held some workouts at the high elevations of mountains in C.R. so his team would not be so faint hearted just because they were playing in cold conditions.
3. European teams have had excellent success playing in FIFA World Cup tournaments. I’m sure since they are not at 10 degrees north latitude that they have plenty of experience playing in cold weather and would not cry about doing the same in tournament play. The C.R. teams can’t carry their local weather with them to all the tournament locations.
4. And, come on guys, playing sports is supposed to allow you to show how physically and mentally tough you are. The C.R. team manager and some of the comments attributed to the team’s members do not sound like those of real sports men, but like little boys looking for an excuse because they lost a game.