Costa Rica News – Every once in a while the Costa Rica National Soccer Team shows up to play. Costa Rica dominated Guyana at soccer, 7-0, to clinch a spot in the hexagonal round of World Cup qualifying, joining Mexico who also advanced out of Group B. Brenes and Saborío scored twice, leading the way for Costa Rica. 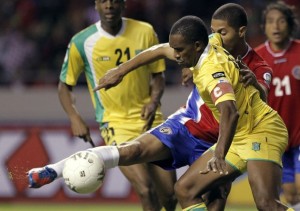 In Group A, Tottenham striker Clint Dempsey scored two goals to lead the United States over visiting Guatemala 3-1 Tuesday and into next year’s North American final round of 2014 World Cup qualifying.

Honduras routed visiting Canada 8-1 to advance while Panama moved through with a 1-1 draw at winless Cuba and Costa Rica blanked winless Guyana to advance on the concluding night of the 12-nation penultimate qualifying round.

Three CONCACAF teams will advance to the 2014 global football showdown in Brazil.

Costa Rica needed victory over winless Guyana to ensure advancement and the Ticos struck quickly, Brenes finding the net in the ninth minute and Cristian Gamboa adding another Costa Rican goal in the 13th minute.

Brenes scored again in the second minute of the second half, Saborio boosted Costa Rica’s lead on a penalty kick in the 51st minute after Guyana’s Walter Moore was ejected and Cristian Bolanos made it 5-0 in the 60th minute.

Celso Borges scored for the Ticos in the 69th minute and Saborio netted the last marker in the 76th.

A week ago, Costa Rica seemed in danger of being eliminated from the World Cup. But after a 1-0 win in San Salvador, and a rout of Guyana, Costa Rica carries some momentum into the next stage.