Costa Rica Sports News – (AP) – Defying all the doubters, Costa Rica came through perhaps the toughest group of the World Cup unbeaten and on top. Costa Rica followed up its wins over Uruguay and Italy by holding England to a dour 0-0 draw on Tuesday, enough to finish first in Group D. Quite an achievement for a team that was seen as the rank outsider in the first ever World Cup group that contained three former champions. 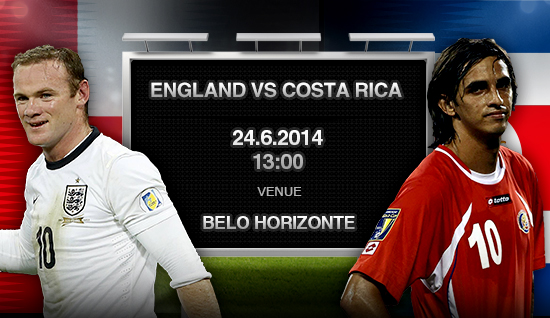 ”It wasn’t the death group after all – at least not for us,” Costa Rica coach Jorge Luis Pinto said. He dedicated the qualification to ”those who believed in us and those who didn’t.”

”People started believing after the game against Italy,” he added.

Uruguay also advanced from the group after beating Italy 1-0.

Costa Rica only needed a draw to top Group D and played that way, setting up in a defensive 5-3-2 formation against England.

The result gives Costa Rica its best World Cup performance. While Los Ticos reached the knockout stages in 1990, they finished second in a weaker group. Costa Rica will now play the runner-up in Group C in the second round.

”We will have to keep fighting,” Pinto said. ”Whatever happens we are willing to fight.”

England lost its first two matches to Italy and Uruguay and was already eliminated. England goes home from Brazil without a win after striker Daniel Sturridge missed a number of chances Tuesday.

But coach Roy Hodgson thought his team showed spirit against the Costa Ricans, trying to break down a stubborn defense.

”We showed today what a good team we can be,” England coach Roy Hodgson said. ”Apart from the first 10 minutes, I thought we dominated.”

One of Sturridge’s best opportunities came in the 65th after a nice one-two with midfielder Jack Wilshere. But the forward’s curling shot from the right just missed squeezing inside the far post.

Costa Rica had started the match brightly, passing the ball around midfield with ease and making England chase them around. Forward Joel Campbell had an early chance, but his shot from inside the area deflected off Gary Cahill and went just wide in the second minute.

Costa Rica’s best chance came in the 23rd minute when Celso Borges’ curling free kick was tipped onto the crossbar and out for a corner by England goalkeeper Ben Foster.

But that was about it in terms of attacking for the Costa Ricans and they were happy to absorb England pressure, especially in the second half.

”Some people said we would only defend,” he said. ”No, that’s not true. You have seen it. We have been able to attack as well. That is why we are very proud,”

With nothing to play for, Hodgson made nine changes to the England team, fielding a slew of younger talent, including Adam Lallana, Ross Barkley and Luke Shaw.

England’s backup players looked disjointed in the first half, giving the ball away easily and finding it difficult to break through Costa Rica’s setup.

Wilshere made a fine run down the left in the 12th, setting up Sturridge just outside the area, but the forward’s curling shot just missed wide.

Wayne Rooney came on as a substitute late in the second half and made an instant impact for England. He found space just outside Costa Rica’s area in the 80th, but the backpedalling Costa Rica goalkeeper Keylor Navas was able to tip it over the bar and out for a corner.

While England showed improvement in the second half, the team just couldn’t find a way a through Costa Rica’s rearguard.

A hardcore group of about 150 England fans stayed in the stands long after the final whistle in an otherwise empty Mineirao Stadium, chanting loudly and jumping up and down.

About 25 armed riot police with shields and batons formed a line behind stewards who were urging them to leave. Singing ”England Till We Die,” the fans eventually left the stands peacefully.

Costa Rica Picture of the Day – The Road Less Traveled

The Aftermath of the Teacher Strike in Costa Rica