Costa Rica News – Luis Guillermo Solis is a professional historian, but his life as president of Costa Rica has thrust him squarely into the present, where he has become a voice for sustainable development, activism on climate change and peace. 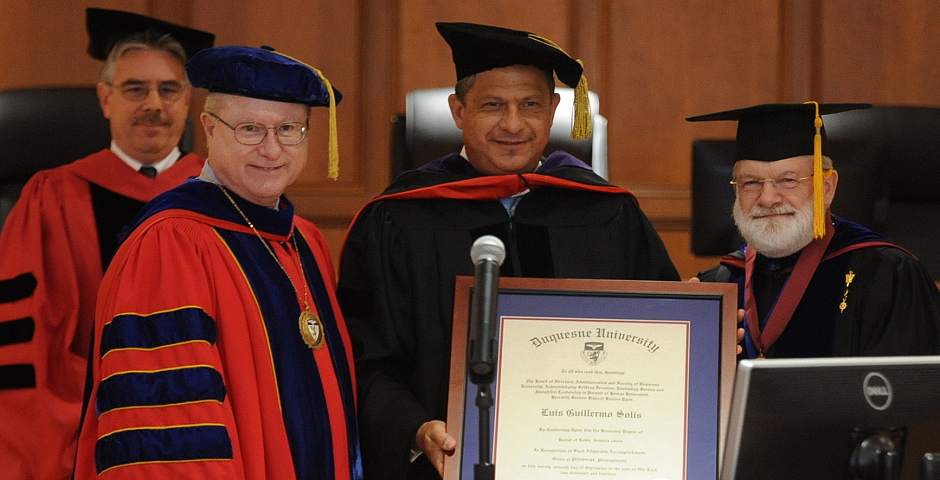 Earlier last week, the newly elected president of the tiny Central American nation that abolished its military 65 years ago took his message to the United Nations General Assembly.

He echoed the same themes Saturday when he visited Pittsburgh to accept an honorary doctor of laws degree from Duquesne University.

Flanked by the American and Costa Rican flags, Solis, 56, thanked officials at Duquesne for the degree, calling it “an unexpected gift.”

Solis, who has studied in the United States twice as a Fulbright scholar, said his nation’s decision to rely exclusively on international law is one of the reasons he cherishes its relationship with the Catholic law school in Pittsburgh.

“Peace begins with a rule of law,” Solis told the crowd at Duquesne.

Solis, a professor of history and political science at University of Costa Rica, became the nation’s president this year. Although Costa Rica, a nation of 4.5 million that is slightly smaller than Vermont and has been a democracy since 1889, is considered one of Latin America’s most stable democracies, Solis said much work remains.

“I would like to see Costa Rica grow stronger following a democracy such as yours. When we have solid institutions the rule of law can be upheld,” Solis said.

The Saturday ceremony marked the culmination of a relationship between Duquesne and Costa Rica that began when Duquesne law professor Robert Barker, then a Peace Corps volunteer, visited Costa Rica in 1968 to tour its newly established legal clinics.

Barker, who teaches constitutional and international law, said he hopes the relationship between Duquesne and the Costa Rican judicial and legal system, which has included exchanges between the university and Costa Rican professors and judges, will flourish.

“I hope we’re just getting started,” Barker said as law professors and students lined up to greet Solis.

Duquesne Law School Dean Ken Gormley, who lectured in Costa Rica earlier this year, said he is proud to partner with the nation’s judicial and legal education system.

“(Costa Rica) is a stable and advanced democracy. It is (a) strong economy. It has placed a high priority on the rule of law,” Gormley said.

Do I Have Enterovirus? What to Know About The Virus