Ten tons of hammerhead shark fins have been in storage in Costa Rican warehouses since March 1 of 2015, when the government issued a ban on the export of hammerhead shark fins as part of its Convention on International Trade in Endangered Species of Wild Fauna and Flora (CITES) obligations. The fins were obtained and stored during the export ban and any attempt to export them is considered a violation of CITES. Thousands of individuals and 22 Non-Government Organizations (NGOs) from around the globe are petitioning the government to stop any export attempt.

Cocos Island, a UNESCO World Heritage Site off Costa Rica, is famous for its population of Scalloped hammerhead sharks. The island is visited by numerous tourists from around the globe each year, wanting to experience the island’s premier shark diving and world-class Costa Rica liveaboard diving.  Cocos Island is vulnerable to illegal shark fishing in and around its protected waters and the Scalloped hammerhead is listed as Endangered on the International Union for Conservation of Nature (IUCN) Red List of Threatened Species. This hammerhead shark species, along with other hammerhead species, is in dire need of protection; both to secure the health of Costa Rica’s ocean ecosystem and the thriving marine tourism industry. 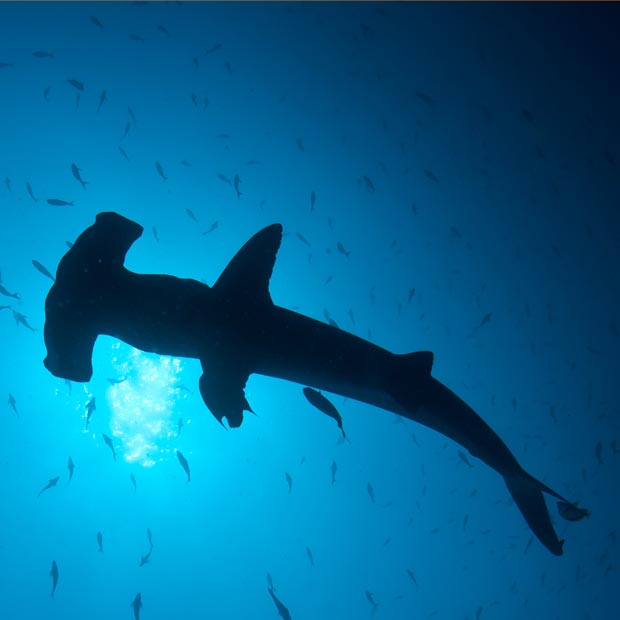 Naranjo explains ‘the Costa Rican Fishery authority, INCOPESCA, has allowed fishing efforts upon hammerhead sharks to continue at their current unsustainable levels, resulting in a stockpile of over 10 tons of hammerhead shark fins (possibly even 20 tons) in the port city of Puntarenas, waiting for a future approval to export.’

The letter, written on behalf of 12,000 individuals and well-known global NGOs including WildAid, Sea Shepherd Conservation Society, and Fins Attached, urges the government to stop any attempts to export hammerhead sharks by issuing a Presidential Decree to permanently ban the export of stockpiled fins.

According to CITES, Costa Rica must determine if it is possible to remove hammerhead sharks from their natural environment without putting the species population at risk, or confirm if the international trade in hammerhead sharks from Costa Rica should be banned. Studies performed by Costa Rica’s CITES Scientific Authority Representative Council in 2015 and 2017 both confirmed it was not possible to export fins sustainably.

The government has since determined the sharks are not protected under the Wildlife Conservation Law and have granted the Costa Rican fisheries authority INCOPESCA the authority to undertake its own study. The results of this study will be released in March 2018.

“Obviously, INCOPESCA will recommend that fin exports be resumed, despite two panels composed of the country’s best scientists indicating that the activity cannot be done sustainably”, said Randall Arauz from the USA based organization Fins Attached. “Once again, Costa Rica is evading its CITES obligations in order to favor private interests, in this case the shark fin exporter, in detriment to the public’s interest and of course hammerhead sharks”

This article was written by divers and writers for Liveaboard.com.

All rights reserved. This article pitch or any portion, data or references thereof may not be reproduced or used in any manner whatsoever without the express written permission of LiveAboard.com.

Beyond Hobbes and Rousseau