Costa Rica News & Events – With about a week in between the all out parties in Zapote and Palmares, we are left wondering what to do with ourselves during these down days. By the time the wait is over, people enter the fairgrounds at Palmares either already drunk or in desperate search of a cool beer, as if they have not had a drink since…well, a week ago in Zapote. 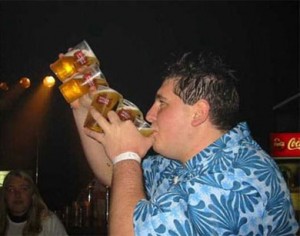 The weeks of Christmas, Easter, Carnival, and Palmares have the highest beer sales annually.

Have you ever wondered about the beer culture’s past? Beer was first brewed in Sudan. The Sumerians then fermented beverages and produced barley. The Babylonians had 20 types of beer. The Egyptians put beers in the tombs of pharaohs, to be enjoyed after death. The Germans became the first to use hops. In the 14th century, Ale was introduced, in the Netherlands.

Costa Rica’s modern day beers come from the Costa Rica Brewery, run by Fifco, Florida Ice & Farm. They produce ten variations of beers, including light ones. The facilities in Alajuela make 100,000 cases daily. They get the malt in bulk from Canada and Europe and convert the starches to sugar. They filter, pasteurize, and pack it. They are determined to put out quality products that appeal to different tastes and occasions. Some are for parties and others for accompanying meals. There are also small breweries that make specialty blends. They see beer as art.

The Costa Rica Brewery hired 26 seasoned beer tasters. Isn’t that the greatest job in the world! They are given beers in black containers so that the colors don’t influence them before tasting. Of the 100 components in a 50 milliliter sample, 80% can be perceived by aromas. The experts recommend smelling your beer before tasting it. They also recommend storing it at 10-12 degrees Celsius and pouring it at a 45 degree angle, to get the best foam. Most experts prefer beers that are stored in amber colored bottles, because the color protects the product from being affected by the sun.

The school of Statistics at the University of Costa Rica showed that of those who regularly drink alcohol, 79% drink beer. They also showed that 57% of the adult population consumes alcohol and 4% consume it excessively.