Costa Rica News – Costa Rica asked the highest U.N. court on Monday to establish its maritime boundaries with Nicaragua once and for all to end repeated border disputes with its Central American neighbor. 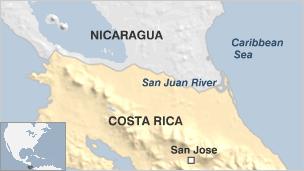 It appealed to the International Court of Justice in The Hague, sometimes called the ‘world court’, to fix maritime boundaries in the Pacific Ocean and the Caribbean Sea and to declare Nicaragua’s establishment of a military post on a beach on Isla Calero illegal.

Nicaragua, which lost a similar case to Costa Rica in 2015, was expected to put its counter-arguments to the court on Thursday.

The countries have a handful of claims and counter-claims before the ICJ mostly centering on the mouth of the San Juan river and the Isla Calero, a virtually uninhabited area claimed by both states.

Nicaragua’s rejects that, though its arguments are not yet known.

Costa Rican ambassador Sergio Ugalde told the court on Monday that Nicaragua was seeking to justify the location of the camp with “unrealistic and exaggerated claims” that would re-draw Costa Rica’s sea and land borders.

How to Cut a Watermelon This 4th of July

Rejection of Single Use Plastic in Costa Rica