Costa Rica News – Although the soccer reigns supreme in Costa Rica, there is another football team in the country making headlines. The Costa Rican American football team came close to winning it all. 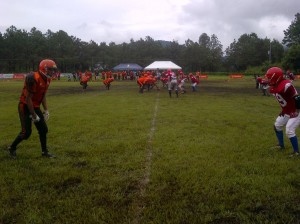 Over the past 6 days the Central American championship was held in El Salvador for all American Football teams in the area.

It was the first time that the Costa Rican team had ever played in the championship game.  They have only been playing in this league for 5 years now and were happy with the result. There are a lot of positives that the team will take from this trip and apply to seasons down the road.

The team seemed to be surprised from the beginning by the Panamanian squad.  From play one they were dominated.

The Panamanian Team jumped out to a 14 to 0 lead after quarter one and never looked back.  The game was over early and at half time the score of 35 to 6 said everything.

Although the final score of 54 to 13 was a little bit of an ass kicking, the Costa Rican squad took alot of lessons from the trip to El Salvador.

“We are one of the younger teams in the Central America Football Federatio.  We are only five years old and to make runner up is really important, it means that we are on track but we have a lot to improve and hope to prove ourselves next year when we host this tournament in Costa Rica,” said Paolo Vincenci President of the Costa Rican Federation of American Football.

Let’s hope next year we can bring out some big crowds to support the team.

Only in Costa Rica for Week of September 16th