Costa Rica News – The motto in Costa Rica should be if there are not regulations in place to make sure that is accounted for then it will be stolen.  This has been proven with money in different government entities and passes down to every level of government. 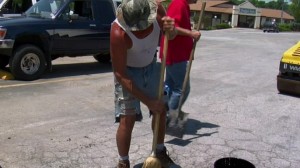 Prosecutors are investigating 10 municipalities that received asphalt donated by the Costa Rican Oil Refinery (Recope) and the product was not used in its entirety for work it was approved.

According to the research, Recope donated 1,574,390 liters of high quality asphalt emulsion (AC-30) in 2010 to those local governments, but is has been detected that 70% of the product is missing.

All the asphalt that supposedly was not used in the repair of roads, has a value of ¢ 257 million or about $500,000, according to estimates by Recope.

Juan Carlos Cubillo, deputy prosecutor of Probity, Transparency and Anti-Corruption, said the “mega-deals” was performed to find documentation to determine why all the donated material was used.

“This caused a serious problems to the municipalities and citizens who continue to have bad roads,” he said.

The case being pursued is the crime of embezzlement, punishable by up to 12 years in prison. So far, no arrests.

So Recope have about half a million dollars of asphalt for different communities’ governments to use to fix roads and other infrastructure.  Instead those government entities sold about 70% of the material to local asphalt and construction companies.  Putting about $350,000 in government leaders’ pockets.  Corruption at every level and no accountability.

The Golden(plated)rule in this little sister of The Great Satan is: If they don’t steal it it’s either too heavy or they’re too ignorant to know what it is.