Costa Rica News – Back in the day I was told by a guy in Costa Rica that is someone is stupid enough to fall for the lottery scam then it is their own fault.  My heart and soul believes the same thing now as it did back then……these Costa Rica scammers should be just lined up and shot. They have no ethics or should be eliminated.  These people worked hard for their money and just because you are a sack of shit and cannot make money honestly does not give you the right to steal it. 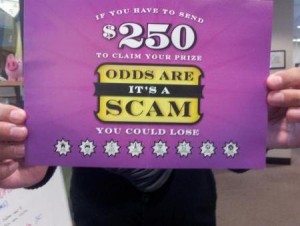 You know the old saying — if it’s too good to be true, it probably is? We all know it. But that hasn’t stopped people from falling for a new so-called foreign lottery scam, or sweepstakes scam. It goes like this — you get an email or letter or a phone call from someone who informs you you’ve won a foreign lottery, now all you need to do to claim your prize is send money to cover the taxes and fees. This scam is so pervasive that the U.S. Postal Service and the AARP have teamed up to warn people about it. The two organizations have been sending out mailers —  mostly to homes with older Americans — warning people of the con. Doug Shadel, a former fraud investigator who now serves as director of AARP’s Washington State office, joins us to discuss the scam.

“What [scammers] basically do is they call up people who are over the age of 70. They tend to be women who are lower-income folks. They tell them the good news that they have just won the Jamaican lottery, or some kind of a lottery, worth $8 million and all you have to do to get that money is to pay the taxes or the legal fees of $500 or $800 and you’re on your way. Well, of course, there is no lottery and you’re just sending your money to thieves basically,” says Shadel.

Shudell says the scam has been around for years, but the difference now with these folks is how relentless and aggressive they are.

“In the beginning, [the scammers] are always nice. They’re always saying, ‘I’m going to pray for you.’ I’m asking a lot of personal questions and really being caring. But the minute you stop sending money, that’s when it gets really nasty,” says Shadel. “Actual direct threats of coming over there and doing bodily harm to people. This really has the effect of frightening folks. It would frighten younger folks, but people who are in their 70s or 80s are really frightened by those kind of things,” says Shadel.

Shadel says victims of these types of scams get involved in what’s known as the rationalization trap. When victims do something like this, they think on the one hand they are smart, but on the other hand, they did something stupid. How do you resolve that conflict? Shadel says people can either recognize that they were stupid (a difficult thing to do) or say they are smart — what they did was not stupid — and continue to do it to prove to the world that it wasn’t stupid. The latter is what happens to victims in these scams; they throw good money after bad.

Shadel says he hopes the mailers that the Postal Service and AARP have been sending out help people from falling prey to foreign lottery con artists.

In the Woodinville Patch there was even a report from someone that called the police because of how aggressive these scammers have become.

Reporting person advised officers that her mother has been receiving phone calls on her cell phone from different phone numbers. The callers state they are from different federal agencies and her mother has won a sweepstakes and she needs to send money to Costa Rica as “insurance” for the prize.  The reporting person stated she tried to stop the callers and now they are calling her and leaving harassing messages.

The Broken Road – The Infection