CR, How Many More Turtles Need to Be Hurt? 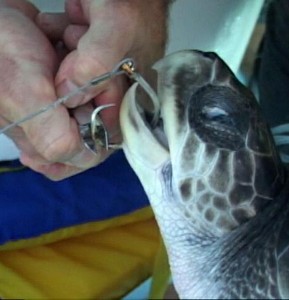 Thousands Olive Ridley and Green Turtles swim in the waters of the Pacific Ocean Costa Rica. Many have a final destination of the end of the line on the hook of fishing gear known as longline fishing.

Between 1999 and 2010, 699, 600 Olive Ridley turtles (Lepidochelys olivacea) and 23,000 Green Turtles (Chelonia mydas) were caught incidentally during fishing activities in the Pacific waters of Costa Rica.

These were the figures that revealed a study by researchers at the University of Drexler in Philadelphia (USA), the Program of Restoration of Sharks and Sea Turtles (Pretoma) of Costa Rica along side an organization called The Leatherback Trust.

A longline is a fishing line usually made of monofilament. The length of the line generally ranges from 1.6km (1 mile) to as long as 100km (62 miles). The line is buoyed by styrofoam or plastic floats. Every hundred or so feet, there is a secondary line attached extending down about 5m (16 feet). Their target are billfish (sailfish, marlin, swordfish) and tuna (yellowfin and skipjack).

The real question to be addressed here is not if the waters of Costa rica are being raped of its sea life with illegal fishing methods and shark finning. The question that needs to be asked is when will Costa Rica start enforcing the “laws” it has passed.

Costa Rica has had the audacity to go to the UN and propose that a worldwide ban of longline fishing. How is this not a complete joke?  They are allowing it in their own waters but yet they are asking for a worldwide ban.  We see through the lies Costa Rica.

This was requested about the same time that Laura Chinchilla brought down Sir Ricahrd Branson to sign a shark finning ban in the Costa Rican waters.  Again this is another law that is not enforced. Recently the head of ICOPESCA was arrested for involvement in the shark finning business in Costa Rican waters. The same group that was supposed to be protecting the waters has been proven that they are involved.

Your lies have been exposed Costa Rica. It is time for you to change your actions to back up the millions of marketing dollars you are spending to “protect your image.” You can spend as much as you want but no one is buying what you are selling anymore.