Costa Rica News – As I said before for the right amount of money in Costa Rica pretty much anything is possible.  You can get around most laws that are supposed to be enforced by throwing a little cash in the right direction, but it can come back and bite you in the ass.  False stamps and documents get you fined and potentially deported. 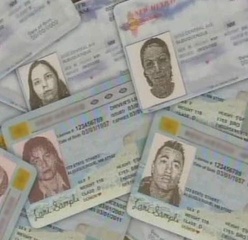 For $90 a group would forge work permits for foreigners, permits to carry weapons, passports, identity cards and residence cards, driver’s licenses and certificates of approval for the Technical Review Vehicle (Riteve).

In some cases, depending on the requirements of buyers they would charge about $130.

Yesterday, the Research Unit of the Immigration Police and the Office of the Public Prosecutor Fraud arrested two suspects from the sale of these counterfeit documents.

The arrest was made during the search of an apartment located in San Sebastian, San Jose.

According to information provided by the authorities, this was the main center of operations for the group.

At the scene, investigators found a laboratory with the necessary elements for making false documents.

One of those arrested is named Castillo, and who was apparently leading the group.

The other captured is a man named Solis who is called Pythian. Police think that this was the right hand of Castillo.

If you need false documents you can always find someone to get them for you in Costa Rica, but it is not usually worth it. I recommend finding a good and trusted lawyer to help you with any documents you might need.  It might take a longer period of time but you will not have to wonder if someone asks for your passport will they be able to see that the VISA stamp is fake, ending up in deportation and fines.

Costa Rica Dental Implants – What You Need To Know

Once you understand that CR is a country where the great grannys most used household tool is her knee pads, her husbands favorite “hobby’ was his wifes mother and his brother was a Padre whos job was “bathing” little boys and condoning burglary since “Gawd doesn’t want anyone to starve” and making sure the weekly 10% found it’s way to The Silver Tray (just plated—-he pawned the original– even tho the “donation” was stolen from a tourists backpack) you can never really understand The Culture.
PaPa-aPa-Pooooooduh Veeduh.
The only thing that get’s them in trouble is lying without wearing long pants and a fake smile.