I love how the Costa Rican government can be completely hypocritical. They approve the fact that Costa Rica will give up to other nations what people living here are paying in taxes and making but they themselves will not allow an audit of where the funds were spent on the border trail and in other sectors of the government like ICE.  Laura please think about what you are doing, these stupid laws you are passing and the actions of your government is killing your country and making people get the heck out. 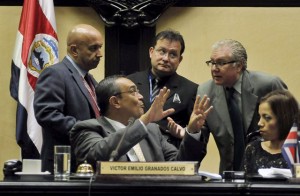 The 48 deputies present in the plenary this afternoon unanimously approved the plan of fiscal transparency. The initiative was discussed under the record raises 17,677 and tax information exchange between Costa Rica and other nations.

In addition, it provides the Ministry of Finance oversight work and make a new figure to open bank secrecy by a judge processor, to facilitate the investigation of possible tax offenses.

With the approval of the plan the Government aims to lift Costa Rica to the gray list of the Organization for Economic Cooperation and Development (OECD).

The government was committed from April 2009 to comply with OECD standards out of the gray list.

The President of the Republic was among the first to react to the vote the plan and did so from their own social network twitter.

“I am pleased to vote on Fiscal Transparency Act which will strengthen the state’s ability to tax evasion and pursuit,” said the president.

The Congress President Victor Granados, announced that the plan would be to consult the Supreme Court.

Who here really believes any of this?? If you do your fooling yourself.