Costa Rica Falls to the USA in Soccer

Costa Rica News – Be very quiet……this is me cheering for the USA soccer team beating Costa Rica.  U-20 Costa Rica lost this afternoon to the United States, 0-1, in the second game of the 2013 FIBA Americas Championship in Turkey. 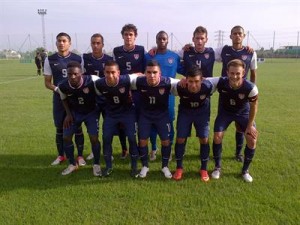 The goal was scored in the  62nd minute on a corner kick that was put in the back of the net by Jose Villarreal, with an accurate header went right past Tico Goalkeeper,  Jairo Monge.

Prior to the goal there was not much action in the form of scoring chances.

In the first half both teams seemed to e very happy with the game remaining scorless.

Already after the goal, Costa Ricans quickly responded to try to equalize the match when Geovanny Cantillano smashed a ball into the stands in the 74th minute.

John Jairo Ruiz had another chance to score, but the goalkeeper Crody Cropper stopped  powerful shot.

The result requires Costa Rica to beat Cuba to get its ticket to the World Cup, a team that won its two-group mtches and will face Costa Rica next Tuesday at 8 pm.

I am from the USA so I always cheer for the team, even if in silence at home as to not offend any locals.   However, I noticed when I arrived in Costa Rica they do not do the same.

I was watching an U-20 match with the USA and the Ukraine about 5 years back and was excited to see Freddy Adu play. There were several Costa Ricans cheering for the Ukraine team and drinking.

I asked them why they were cheering for the Ukraine and they told me they cheer fro anyone playing the USA as they hate that team.  I asked them if they knew where the Ukraine was located.

The answer “somewhere in Africa”.