Costa Rica Sports News – Already losing a star defender and a key striker the Costa Rican national soccer team could not afford to lose any more key players for the World Cup that starts in less than a week.  They are already in a tough group from which it will take some great play to get to the next round. 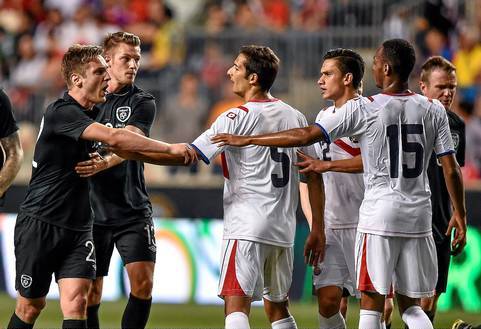 However, during the last warm up before the World Cup in Brazil Costa Rica defender Giancarlo Gonzalez was given a red card for violent behavior.

The 26-year-old defender was dismissed 41 minutes into the 1-1 draw with the Republic of Ireland in Philadelphia during the early hours of Saturday morning for swinging an elbow at striker Kevin Doyle, who later had five stitches put into a head wound.

However under FIFA rules, the repercussions of his red card will not come into force until Costa Rica’s next friendly, meaning he is free to play in Brazil.

The regulations state in relation to the sending off: “Friendly matches: (suspension) carried over to the representative team’s next friendly match.”

Gonzalez was reprimanded by manager Jorge Luis Pinto and told to learn his lesson in the immediate aftermath of the game at PPL Park.

The game was Costa Rica’s last before they open their campaign against Uruguay in Fortaleza on June 14 before meeting remaining Group D rivals Italy and England.

Drink Away! Vegas Airport Has Medical Clinic for Hangovers