Costa Rica News – While Costa Rica has the lowest number of people living in poverty among other Latin American countries, it still struggles with this issue. It is still and continues to be around the 20% mark. Unfortunately, more poverty also equals more crime.

This isn’t to say that people that are poor are criminals and will commit crimes. If a person is poor, yet still manages to have food, housing, and adequate clothing, they are less likely to commit crime. The more likely criminals are the ones who are desperate because they don’t have enough to survive on.

Many human rights advocates around the world have been arguing the case of governments only controlling the criminal behavior by throwing thieves into jail cells, while not tackling the problem of poverty which is the catalyst to the symptom of thievery and criminal activity. There is more money spent afterwards of punishing those individuals rather than putting money toward the initial disease of poverty.

A lack of education is also linked with poverty and can also be an indirect cause of crime. As it leads to under-education it may make the choice of a criminal lifestyle more likely.

This graph shows the proportion of US inmates that is illiterate, compared to total US illiteracy: 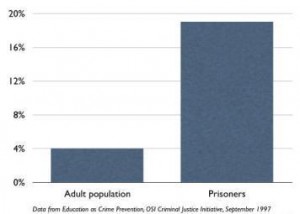 In 1869, Costa Rica became one of the first countries in the world to make education both free and obligatory. However, according to the definition of literacy that is used as a standard which is: ‘The percentage of people over the age of 15 that can read and write’, Costa Rica is ranking in the 96 percentile. Perhaps in Costa Rica it isn’t the lack of literacy that is causing people to turn to crime, perhaps it truly is a lack of education in the 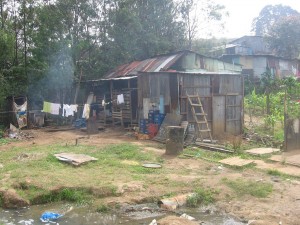 country; students not able to learn about what they can actually strive for in a career, or job. Another huge issue that was written about before is the high level of teenage pregnancy. While this may not be a direct cause of the criminal element, it certainly doesn’t contribute to having a lot of options and choices for a young, single, struggling mother.

According to the Overseas Security Advisory Council (OSAC), Petty theft continues to be the biggest threat in Costa Rica. Pick-pocketing, muggings, purse snatchings, and theft are common occurrences and seem to be the biggest issues confronting tourists. Specifically speaking, the U.S. Embassy has seen an increase in the amount of passport thefts; in 2012, there were nearly 700 U.S. passports stolen. Costa Rica ranks among the top three countries in the world in U.S. passport thefts. Credit card theft and fraud is also on the rise with a reported 916 victims in 2012.

Of the individuals who reported being victims of credit card theft/fraud, 22 were U.S. citizens. Violent crimes like murders, robberies, and sexual assaults also have been committed against Americans. Since January 2011, at least 12 U.S. citizens have been murdered. Costa Rica’s Organismo de Investigacion Judicial (OIJ) reported 394 homicides in 2012; two were listed as U.S. citizens. Nine U.S. citizens have reported that they were sexually assaulted in 2012. The criminal threat for San Jose is rated “High” by the U.S. Department of State. Violent crime is of significant concern to the local security services. However, in 2012, there was a marked decrease in the number of homicides committed. In 2012, there were 394 murders committed, down from the 2011 total of 459.

Last year a US$200 million loan aimed at strengthening the scientific, technological and academic capacities of the four public universities that comprise Costa Rica’s National Council of Rectors (CONARE), was approved by the World Bank Board of Directors. Almost 100,000 young Costa Ricans will benefit from innovative and better university education, as a result of a “Improving Higher Education in Costa Rica” Project to help universities invest in infrastructure, equipment and human resources, accommodate more undergraduate and graduate students, increase the number of accredited university degrees and strengthen their innovation, scientific and technological development programs.

There are four higher educational institutions that will benefit: The University of Costa Rica (UCR), the State Distance Education University (UNED), the Costa Rican Technological Institute (ITCR) and the National University (UNA). Last year these universities enrolled 47 percent of Costa Rica’s university population. This plan benefits 95,000 students per year, 62 percent of which are women.

The Most Beautiful Woman in the World?