Costa Rica News – Each and every day of 2013, the OIJ, the Judicial Investigation Organization, received 122 property crimes allegations, according to the Office of Plans and Operations. That figure can be broken down into 37 reports of pedestrian assault, 28 thefts, 20 burglaries, 13 thefts in other buildings, 13 vehicle attacks, 10 vehicle thefts, and 1 aggressive assault on a house. 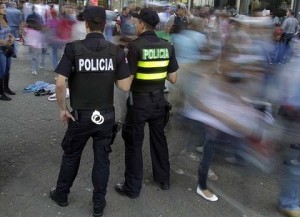 The crimes that increased from 2012 were thefts and assaults on people, which increased by 37% and 23%, respectively. The attacks on houses decreased by 13%. The number of homicides remained the same.

Because of an increase in the population, the total crime rate went from 8.9 to 8.6 per 100,000 people. Still, there was an assault on a pedestrian every 39 minutes. One theft occurred every 52 minutes. Many involved building trust and pickpocketing.

The cantons with the most concentrated attacks were San Jose, Alajuela, and Heredia. Limon, Cathedral (in San Jose), and Alajuela were the most dangerous districts. The majority of victims were men between ages 18 and 29. The majority of assaults occurred on Fridays, between 6 and 9pm.

Is it any surprise that with the increase of people living below the poverty level coinciding with the increase in the cost of living in Costa Rica has most likely led to this increase in crime? As one needs to fight for their basic needs of survival including food, shelter and water many resort to crime if they cannot come up with the monetary means to purchase these items legally.

The increase in crime levels is a result of a bigger problem in Costa Rica that needs to be addressed at the highest level of government. The question is do they really care or is staying in power more important that addressing the increase in poverty in Costa Rica.