Costa Rica News – Let’s have a show of hands of anyone that is surprised by this news.  Wait……no one? This is a clear example of why illegal fishing, shark finning, and drug trafficking occur on a daily basis in the waters of Costa Rica……the people that are supposed to be policing these actions are involved. 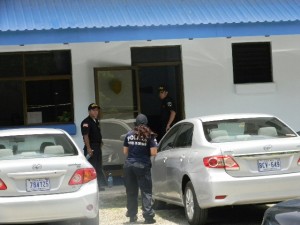 The station chief of the Coast Guard (NG) in Quepos was arrested  for his alleged links to drug trafficking organizations.

The Drug Control Police (PCD) captured Mario Rodriguez Oscar Madrigal, 51, at the station where he was working.

Ministry of Public Security revealed that the police chief was involved in a case where nine subjects were arrested and they seized 901 kilos of cocaine. This happened on April 7th.  Good chance one of the people busted got offered a deal to rat him out and took it.

Rodriguez was the head Quepos station for a year and five months. He has also worked with the Coast Guard for 17 years and six months.

According to the police report, a year ago they started an investigation against four drug organizations, two of which operated in the region of Quepos.

Two months ago researchers found out that the Station chief  had contact with the bands.

While capturing Rodriguez, the officers seized with a cell phone that the official allegedly communicated with drug trafficking organization.

They also found related documents from previously seized vessels that were transporting drugs.

We can only hope that the Coast Guard Cheif is actually dealt a severe enough punishment that it will deter others from doing the same thing.  But most likely as it is with police officers that take bribes in Costa Rica, he will get a few months in jail or a paid suspension from duty.

Technology of Things to Come?