Costa Rica News – Costa Rica has become the first Latin American country to ban hunting for sport.  I am personally not really bothered by this as it is really not that popular to hunt for sport in Costa Rica.  The only thing I am not ok with is the fact that congress can get together and get this law passed pretty much overnight but they can do nothing about the Chinese and the shark finning going on each day in their Costa Rica waters.  You cannot have your cake and eat it too. 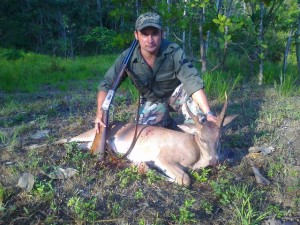 The proposal includes fines of up to $3,000 for those who kill animals for subsistence without scientific purposes or to monitor the species.

Also it set fines up to $1,800 for who those who traffic wildlife species, ie animals that can survive without human intervention.

41 legislators voted for this to pass and 5 against. This is the first standard to be adopted in the country from the citizens’ initiative.

The project, which was discussed as case 17,054, is the result of the support of 177,000 signatures, collected mostly by supporters of the environmental Apreflofas that led to the law reform at the hands of deputies.

The Popular Initiative Act, in force since 2005, was the instrument that allowed citizens to put the plan in Congress that led to the discussion of punishment to sport hunting in the country.

Did Communist China get a back door deal from current president Lady Laura and past presidents. They can fish our waters and therefore take the sharks?? After they are all gone then China will move on to other countries. Look what they did to Africa. CR is selling out it’s future.