Yesterday my mother-in-law taught me how to make Tamales, the typical Christmas food of Costa Rica. Tamales are made in several Latin American countries, each with its own distinct take on this traditional food. Here in Costa Rica, they are made using plantain leaves which first have to be sealed by passing the leaves over a fire until they darken and almost char.

Making Tamales is a lengthy process, but the event itself is a time for families to come together and take part in the ritual passed on through the generations. The base for the Tamale is a type of corn meal known as masa mixed with pork or vegetable fat which first has to be cooked and enriched with stock made from chicken. The masa is mixed with potato and left to cool resulting in what appears to be an unappetizing stodgy paste reminiscent of wall filler.

A dollop of masa is placed on a plantain leaf. Next comes the creative bit- adding the fillings. Chicken, pork, rice, carrot, chick peas and raisins-in fact whatever you like to put in. Each family has its own recipe and family members are 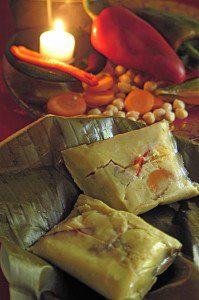 encouraged to assemble the Tamales in the time honored way. Having put all the ingredients in, next comes the wrapping stage. Two sheets of plantain leaves are carefully rolled to avoid splitting and the pillow shaped bundle is held together like a parcel with string. The Tamales are paired in bundles traditionally called a pina. The pinas are then boiled for an hour or so and served hot. They are not specifically for Christmas Day, but are eaten throughout the holiday period and can even be taken to the beach for a picnic. Like most Costa Rican food, Tamales lack the fiery flavors of their Mexican cousins, but they are never-the-less delicious and a great way to get everyone involved in the holiday spirit.

In return, I will reciprocate for my Costa Rican in-laws by serving a traditional English festive food, the Christmas Pudding. Christmas Puddings were allegedly first made by the ancient Greeks, who made a sweet sticky cake of dried fruits that could claim to be the ancestor of the modern pudding. However, the Victorians were really the inventors of many Christmas traditions, including the Christmas tree. The ritual of the Victorian Christmas pudding involved the whole family from oldest to youngest taking a turn at stirring the sweet dark dough, filled with dried raisins, sultanas, cherries, plums, nuts and spices like cinnamon, nutmeg and ginger.

Thirteen puddings were made, twelve for the Apostles (or months of the year?) and the thirteenth pudding was known as 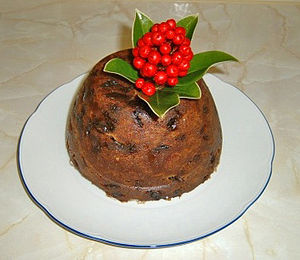 the Judas Pudding and left to rot unless a stranger should cross the threshold in which case the Judas pudding could be served to the visitor. The fruit puddings were then boiled for hours and left sealed in muslin wrapped basins until needed and reheated on Christmas Day.

In a piece of pure culinary theatre, the lights were dimed and the steaming puddings were flamed with brandy and brought to the Christmas table amid the ‘oohs’ and ‘aahs’ of the assembled diners. The dark rich offering was served with brandy butter and some lucky recipient would find a shiny sixpence coin in their portion, place in the dough by the cook. These days few people make their own Christmas Puddings; microwavable ready-made versions can be on the table in minutes rather than hours. You can buy microwavable Tamales, too. The effort is gone, but I can’t help thinking how nice it is that many Costa Rican families have preserved the tradition. Festive food is more than the food itself- making it together is all part of the Christmas spirit.

Costa Rica Marchamo Must Be Paid by Dec 31st