Costa Rica News – Costa Rica is looking to the vast reserves of the United Arab Emirates’s sovereign wealth funds to boost investment in the Central American nation, President Luis Guillermo Solis said, a year after failing to convince the Chinese to buy $1 billion of its bonds. 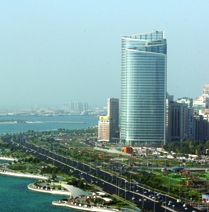 The wealth funds, as well as private investors in the UAE, could buy into a series of highway and railroad projects connecting the Caribbean to Pacific coasts and in the production of high-tech medical devices, as well as tourist facilities, Solis said in a telephone interview interview.

Talks over a $1 billion bond sale to China stalled early last year, forcing the Central American nation to cast its net for foreign investment wider as it looks to drive growth, while curbing a burgeoning budget deficit. The Abu Dhabi Investment Authority manages almost $800 billion, according to the Sovereign Wealth Fund Institute, about 14 times as much as Costa Rica’s gross domestic product.

“The democracy in Costa Rica, the strong adherence to the rule of law in a country that is pretty secure, all of this means that we have a very adequate environment to come and develop,” Solis said in a telephone interview. “We are ready for business.”

Costa Rica and the UAE signed an accord Monday to ease visa requirements for both nations, with Costa Rica opening a trade mission in Dubai and an embassy in Abu Dhabi in the coming months to help foster trade that Solis said is growing 25 percent a year.

The Central Bank forecasts economic growth of 4.1 percent this year and next lead by banking and the service industries. Foreign direct investment is growing at a pace of 9 percent a year, Solis said. The nation received a record 2.9 million tourists in 2016.

Still, unemployment rose in the third quarter last year to 9.7 percent and the government’s budget deficit is forecast to widen to 5.9 percent of GDP this year as it struggles to get Congress to raise taxes.

Bat-Bot is a Drone That Flies Like a Bat