Costa Rica News – For all of those who want a douse of culture in this Wednesday in Costa Rica then head to The Art City Tour in downtown San Jose. You will get a taste of music, dance and other types of art from locals. Best of all it is free. 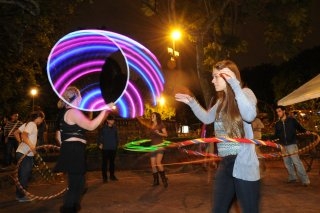 More than 1,000 people have registered to participate in the activity and organizers expect even more to show up for the event.

“Some years we have had more than 1,000 people in the museum alone and that’s just one of the stops on the route,” said Gisela Sánchez, speaking from of the Central Bank Museums.

On event Facebook page there are already over 300 people who say they will attend the activity, which starts on Wednesday February 13th at 5 pm.

This will allow attendees to visit galleries, museums, cultural centers, designer shops, parks and heritage buildings in the center of the capital. They will extend their hours until 8:30 pm and in no case will anyone be charged an entry fee.

This time, the organization’s Art City Tour has three ways to make the journey : on your bike, on your feet or on a bus.

Among the cultural attractions, include the National Museum, where there is an exhibition of 75 traditional Japanese dolls , and the Museum of Contemporary Art and Design, where the varied sample Constructions / Inventions: From the Central Switzerland Happiest Country world exhibit.

The St. Joseph Band will perform at 4:30 pm at the Plaza de la Democracia, and, finally, there will be a surprise serenade that will take place at 9 pm in Temple of Music in Morazán Park.