Costa Rica Sports – Hopefully this time there will be no snow for the USA, Costa Rica soccer match, but there might be since they are at Soldier Field in Chicago. 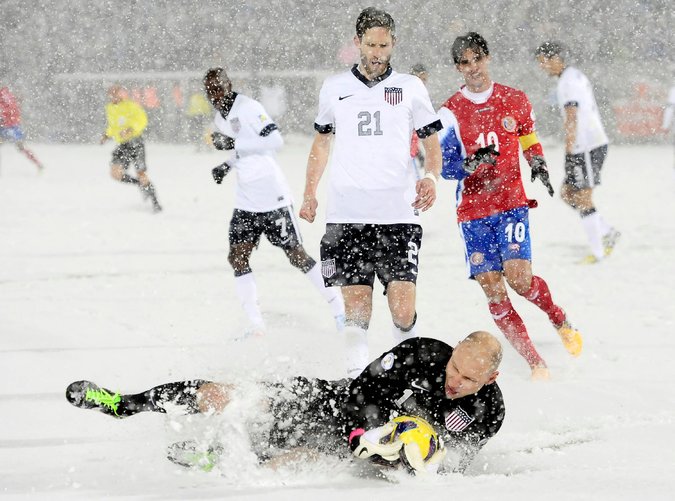 The US men’s national team will face Colombia in the inaugural match of the 2016 Copa America Centenario on June 3 at Levi’s Stadium as Jurgen Klinsmann’s squad learned all three of its group opponents in the tournament’s official group stage draw on Sunday night.

In addition to Colombia, the USA will also match up against CONCACAF rival Costa Rica (June 7, Soldier Field) and Paraguay (June 11, Lincoln Financial Field) in Group A, which many are already considering the Group of Death.

The 2016 Copa America Centenario Draw was conducted in a nationally televised event at New York City’s famed Hammerstein Ballroom with MLS legends Carlos Valderrama, Alexi Lalas and Jorge Campos among the celebrities charged with pulling the team names out of the four pots.

If the USA can finish as one of the top two teams in Group A, they would advance to the quarterfinals where they would face a team from Group B, which includes: Brazil, Ecuador, Haiti and Peru.

In other highlights from the Draw, 5-time world champions Brazil meet debutants Haiti in Group B, Mexico take on Jamaica in Group C in a rematch of the 2015 CONCACAF Gold Cup final and Argentina will meet defending Copa America champions Chile in a heavyweight battle from Group D.

The Copa America will be staged outside South America for the first time in its history as the tournament celebrates its 100-year anniversary. The June 2016 event is expected to be the biggest soccer tournament on US soil since the 1994 World Cup.

The event will take place across 10 cities in the USA, including in three MLS stadiums. Fans can buy Copa America Centenario tickets on Ticketmaster.com.