Costa Rica News – During Semana Santa in Costa Rica there are many Easter traditions that people can experience if they are truly immersed in the culture.  You will always have the opportunity to experience the Catholic traditions throughout Costa Rica with masses and processions in almost every community.

However, what about less well known and controversial Easter traditions in Costa Rica. Through exploring the hidden traditions for Easter in Costa Rica these were some of our favorite.

The Crocodile Capture – In Ortega de Santa Cruz in Guanacaste, men continue to participate in an age old tradition on Good Friday.  The men must capturing a giant crocodile with their bare hands and tie it up to put on display in the center of town. The animal is released the following day, but the tradition has been under scrutiny of animal and environmental conservationists for years. However, it has also grown in popularity as many visitors head to the small town to witness the Easter tradition in Guanacaste. Video Below.

Effigy of Judas – Another tradition that is present in in Costa Rica and several other Latin American countries is the burning of a straw and cloth effigy of Judas, who was the apostle that betrayed Jesus. This is done on Holy Saturday 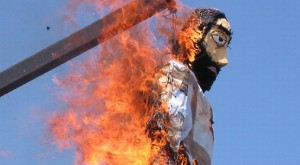 before Easter. Some towns are much more pronounced than others, especially in the province of Heredia including San Joaquin, San Rafael, and Mercedes Sur.

The effigy of Judas is set up in the middle of the town soccer field in front of the church or on the beach in coastal towns. Up until about 5 years ago, the Judas night festivities have turned into riots and arrests as police try to control what becomes a giant bonfire. Sometimes more and more debris is thrown in the fire and vandalism becomes a problem.

The Burning Soccer Ball Game – In Guanacaste, it has been a tradition for men to set up a game of soccer, using the burning head of Judas as the soccer ball. At least they get some exercise right?

If you are in Costa Rica during Easter try to experience as many of these traditions as you can as they will remain with you.  One of my fondest memories was experiencing the stations of the cross in San Carlos near Nicaragua and then doing a testimonial in Spanish at a small church.  Somethings stay with you forever.

North Korea Says It Is In A ‘State of War’