Costa Rica News – Well for all of us with half a brain, we understand that getting into a bullring comes with an inherent risk.  You are surrounded by 100s of other people that you have no control over as well as a 1000 plus pound angry animal. 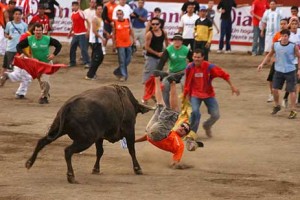 The battle is now coming between INS, Costa Rica’s National Insurance Agency, and the companies that hold these bullfighting events on who is to pay for those people that get injured while amateur bull fighting.  Each one of these entities saying it is the other’s responsibility. Welcome to Costa Rica.

Control over improvised bullfighters no easy task for bullfights although they tried constructing barriers between the fans and bulls in the ring.

These structures are open and what separates the square of the public are wooden fences spaced apart, this allows people to get in and out without control.

According to the Directorate of Operations of the National Insurance Institute (INS), the organizer must sign the for an amount Accident Insurance at the basic level, which should cover the improvised bullfighters.

The venue is not going to want to pay or change and it will just get held up in the Costa Rica court system for a couple of years or in congress for the same amount of time.  So just force the amateur bullfighters to be accountable for their own actions.

Costa Rica is trying it hardest to mimic the USA when it comes to passing laws and legislation, so why don’t they follow with this as well.  If a person is willing to put themselves at risk in a bull ring then make them pay for themselves.  INS should not have to pay, the venue should not have to pay, the idiots that got hurt should have to be held accountable for their own actions.

Accountability a concept unheard of in Costa Rica.