These are some fun conspiracy theories about money and currency in the United States.

Slavery still exists, unseen, in modern day America. Thanks to student loans and mortgages, many people are hounded by creditors, losing their livelihood and finding it impossible to save for the future. Forced to work within the system, trading labor for bank notes, sending those bank notes back into the pockets of our lifelong lenders, Americans are slaves 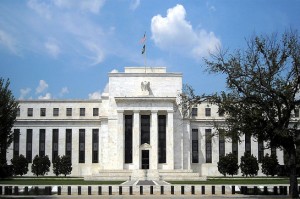 Its name implies that the country’s richest institution is run with federal oversight. But according to author David Graeber’s book Debt, “The Federal Reserve — despite its name — is technically not part of the government but a consortium of privately owned banks which otherwise operates without public oversight.” The Fed’s only government oversight is that the fact that the President appoints its Chairman.

ALL THE GOLD IN FORT KNOX

How many times have we heard the phrase “all the gold in Fort Knox”? While the adage about the United States Bullion Depository is probably true, there are some who think that Ft. Knox might actually be empty. Though it is widely believed that Knox holds about 3% of every refined piece of gold to have ever been made, there has not been a comprehensive audit of the facility’s wealth since 1953. So, no one really knows if all the shiny bars in there are real gold or just lead and paint.

ARE THE CHINESE MANIPULATING THEIR CURRENCY?

It depends on who you ask. Many small countries peg their currency to the euro or the dollar as a way to better manage their foreign exchange, which China technically doesn’t do with the renminbi. However, they take steps to ensure their currency holds less value than the dollar by buying U.S. Treasury notes with renminbi printed, thus also not incurring any debt. It also raises the demand (and the price) of dollars on the Chinese market. So why hasn’t Washington complained? Big business. Many of the companies that export from a China with an artificially low currency are run by Americans.

THE U.S. GOVERNMENT CAN’T PRINT ITS OWN CURRENCY

Amazingly, this is true. The most powerful nation on the planet doesn’t have the power to print its own debt-free money. Instead, it needs to order money from the Federal Reserve by swapping Treasury bonds for cash. The bonds are held by the Fed and make up most of the country’s debt, which means any debt problems the government faces come from their relationship with the Fed.

If government debt is such a huge problem, why can’t Presidents create a debt-free currency? Actually, they have. Andrew Jackson abolished the Second Bank of the United States and withdrew all federal money. Lincoln issued “greenbacks” to Union soldiers to help defray the cost of the Civil War and Kennedy issued U.S. Bank Notes backed by the country’s silver reserves. Why didn’t these policies stick? Possibly because these men didn’t remain alive long enough to lobby for permanent change. Lincoln and Kennedy were assassinated and Jackson would have been as well, if his would-be assassin’s guns hadn’t misfired.

Many think that the next financial bubble is higher ed. According to Peter Thiel, the bubble of higher education is going to burst and lead to economic collapse. The founder of PayPal (and Facebook’s angel investor) says education is “basically extremely overpriced. People are not getting their money’s worth, objectively, when you do the math.” Thiel believes that underemployed graduates who can’t make their loan payments will eventually strain the banking system to its breaking point.

The IRS says no, but vocal tax protestors say yes, using a variety of arguments to back up their “willful failure” to pay income tax. Tax deniers claim the sixteenth amendment was never properly ratified because Ohio wasn’t officially a state until 1953. Or that some of the statues written to enforce the amendment indicate the payment of income tax is voluntary. Taxes, they claim, are nothing more than “government sanctioned extortion.”

THE ROTHSCHILDS CONTROL THE WORLD’S MONEY SUPPLY
Arguably, the Rothschilds, one of the world’s wealthiest banking families, once controlled the flow of money, but they certainly aren’t at the peak of their power any longer. The empire had its glory days in the late 18th and early 19th centuries, with their coup de grace coming in the form of a loan to the Bank of England to help defeat Napoleon. But today, with the rise of the World Bank, IMF, and WTO the Rothschilds no longer have enough assets to have a “controlling interest” in the world’s money supply. That conspiracy theory doesn’t pass muster.

THE ILLUMINATI AND THE DOLLAR BILL 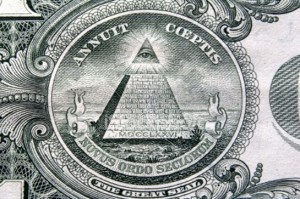 If you believe that the Illuminati secretly control every aspect of society, you are probably aware they have put their stamp on the U.S. dollar bill. According to the Treasury, “The eye and triangular glory symbolize an all-seeing Deity. The pyramid is the symbol of strength and its unfinished condition denoted the belief… that there was still work to be done.” This may allude to the Illuminati and their all-seeing surveillance net. Illuminati references also show up in the Latin surrounding the pyramid, including this (translated from Latin): “announcing the birth of a new secular order.”

TOO BIG TO FAIL

After the financial markets imploded in 2008, the U.S. government bailed out insolvent banks that were judged “too big to fail.” While we’ll never know what would have happened to the economy without those bailouts, we do know that many financial institutions instead used the money to boost the salaries of their highest earners. “Too big to fail” really means huge corporations operate with the government’s guarantee on their assets, meaning they can access capital easier and cheaper, thus garnering more profits for themselves and their shareholders.

One of the main scapegoats of the 2008 recession was all those homeowners who took out subprime mortgages on houses they couldn’t afford. While it is up to individuals to make smart decisions about how much house they can afford, banks should have also been more responsible about their lending practices and should not have tricked people into signing up for loans with artificially low interest rates.

You’ve heard of the euro — now get ready for the amero. Because the European Union’s single currency has been such a success (ahem), there are rumors that a single currency for North America, the amero, is being prepped for circulation. Proponents argue that the amero would be good for the economy because it would make trade easier and cheaper, as well as eliminate companies from taking jobs to Mexico because of its cheap labor. Detractors counter that the amero would make the U.S. reliant on Mexico and Canada for monetary decisions. But while the idea of the amero is very real, it’s no closer to being implemented than a colony on the moon or water-powered cars

Another is the IRANIAN . About 10 years ago I met some people in Texas buying the Dinar/Tomans in huge amounts. I asked of course why and what do you know that know one else does?? They claimed the currency was under priced and the money backed up with the countries OIL.. I saw a few poster and meeting though out Texas pushing this and how they will rake in Billions. Even a special device to make sure the money was””real”” Some had like 100K””invested”” in this worthless money. Today I sure many are sorry falling for this scheme.

The story about the gold in Fort Knox has a thread of truth. All props gold painted bars. A jeweler I know in Kingwood, Texas when buying even small bars of gold has a special drill bit to take a core sample before ever offering to pay. IF they do not agree to allow him he tells them to walk.