A large flock of crows fly by in the distance as I sit facing the fields and foothills. There’s a hundred or more of them spread out in a long line. A meditative state has spontaneously just begun, and it seems like a sign, but the rational mind dismisses the possibility. 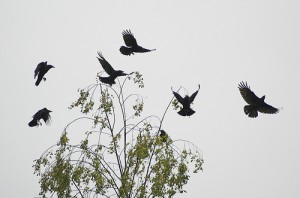 Suddenly the crows, which had been heading south from the direction of the mountains to the north, fly back and bunch together in a huge, tight mass directly in front of me, making two or three turns in unison before flying off in the direction they had been headed.

It was quite a spectacle. Crows are amongst the smartest of birds, indeed of animals, and their appearance held significant meaning for Native American and other indigenous peoples. There were so many of them today, cawing loudly but not disruptively, that they left me with a feeling that something significant had just happened.

Indeed, the sense of some metaphysical meaning was so strong that it could no longer be written off. Unlike most of one’s encounters with animals in nature, this one was associated with a subtle, primal fear that had arisen at depth during the sitting. (The words ‘primal’ and ‘subtle’ seem to be a contradiction, but there it was.)

I sat with things for a while, cognizant of the conditioning of blackbirds as a bad omen, but still viewing the experience as portentous (hopefully not pretentious) due to the core fear that had arisen. So I held to the notion and emotion. To understand and free oneself of something, one has to remain with what is until reaction ends, though that is the most difficult thing for a human being to do.

Out of curiosity as well as continuing unease after the crows flew away, I queried the little computer we all now carry, speaking ‘birds as omens and signs’ into it. Amazingly, this came up immediately: “Blackbirds and crows bring news of good passage and protection. The blackbird omen is one of fear and not based in experience or fact.”

The crows had no conscious intent of course, though one never knows what animals see and understand. The real question is: Can the immeasurable intelligence in the universe speak to the self-knowing human being through nature? Native Americans and all indigenous peoples took that as a given, but in our scientific age, such an approach is arrogantly seen as superstitious nonsense. 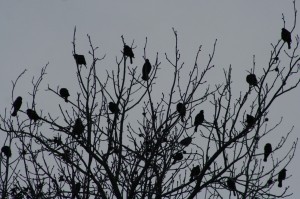 Let’s allow the possibility, and say further that what I read on my iPhone (that pocket manifestation and miracle of science, which I normally turn off during sittings) hit the nail on the head. The question then is, ‘good passage’ into what? Is it purely a personal or individual event?

Coincidence has never been my friend, and I’m doubly doubtful of ‘signs.’ But too many things, both false and true, dark and illuminating, have been happening, which my linear, rational mind (and rationality is inherently linear) can’t deny.

Like most people, I’m not comfortable talking about these things, or even experiencing them. My attitude however is to hold things you don’t understand lightly and skeptically, and convey them tentatively and honestly.

A meditative state, though it may last only a short while, is not a function of time, emotions, or the mind-as-thought, but is the clearing and cleansing of these limitations in the brain.

Meditation is not about filling oneself up, but emptying oneself out. Not about having insights and experiences, but experiencing the state of insight anew each day. (I wonder, can meditation be taught, or only discovered?)

We fear an end to the continuity of thought and emotion, the observer and self, believing that it means instability and chaos. But it’s just the opposite—the continuity of the psychological contents and structures of thought are what’s generating disorder and darkness, within and without. Letting go of them in passive watchfulness allows the wellspring of the natural order, renewal and growth to be released within one.

Most people are defeated by scale, but scale is secondary. Yes, there are now over 7 billion people, and yes, the basic course of man hasn’t changed in a million years. But timing, as the saying goes, is everything. Therefore every person that awakens to insight now could make a difference to human consciousness.

What will ignite the psychological revolution that changes the course of humankind? Those who say it has already begun are deluding themselves, and others. Man is still moving headlong in the wrong direction, toward more and more fragmentation of nature, culture and the individual.

The sources, as always, are within, and the individual, as always, matters most. But only when he or she breaks from the mewing herds and stands alone.