The grafting of Eastern Buddhism onto Western marketing, channeled through New Age schlock, has reached its nadir with a spate of commercials featuring Matthew McConaughey. 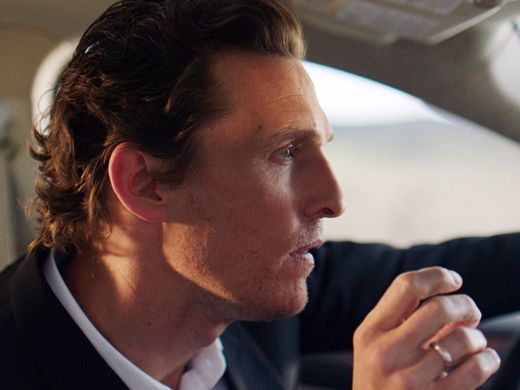 On one hand, the Malibu guru announces he’s “spiritual,” only to correct himself and say that the word spiritual is “a dodge.” “I’m religious,” he says. “I like that word. You can use it.”
Speaking out of the other side of his mouth, McConaughey pronounces, “I’m a fan of the word ‘selfish.’ ‘Selfish’ has always gotten a bad rap. You should do for you.” Which is it Matt?
But there’s the rub. In the McConaughey universe, shilling for Lincolns and Wild Turkey bourbon, you can get drunk or high every night of the week, and still experience mystical states of being.
With an apparent straight face Steven Kurutz, a fashion and lifestyle writer for the New York Times, says,  “Over a period of more than 20 years, almost unnoticed, McConaughey has been building a religion of sorts.”
I can’t tell whether he’s writing tongue-in-cheek with that bon mot, or when he says, “Matthew preaches to his flock largely through the media of men’s magazines and television commercials.”
Either way, on what evidence do the Delphic Oracles at the Times base their annunciation? Sayings from Matthew like: “I’m not in a rush not to be.” Egad, we truly are at the end of civilization as we’ve known it.
It’s fitting that the smooth as bourbon blend of all that’s both undeniably cool and incredibly confused is embodied in the character of Matthew McConaughey, a celebrity so unique you don’t spell out his name writing it, you copy it in its entirety.
His shtick is pure Americaca, a merger of the true and the false so slick and beguiling that it defies anyone who isn’t a religious philosopher to tell the difference.
Can you guess which man of the moment said: “I’ve always been interested in the art of the sell,” McConaughey or Trump? The answer is both, and the difference, when it comes down it, will be left for future theologians, debating how many angels, or whatever, can dance on the head of a pin.
You can have wealth, privilege, self-indulgence and hedonism…and you can be religious, all without a shred of doubt, much less a dark night of the soul.
After all, “Mr. McConaughey goes deep.” No wonder we got The Donald for president.
What Matthew’s mindset does not address of course, what it doesn’t go near or shed a tear for is the suffering and darkness of the world. As a friend said to me today about the horror of Aleppo, “It’s like watching the Holocaust on TV.”
The dilemma is as old as man, and woman. We face the seemingly irreconcilable difference between what the Romans called vita contemplativa (the contemplative life) and vita activa (the active life). (Note to followers of the guru Matthew: his ad scheme marrying the two simply doesn’t work.) 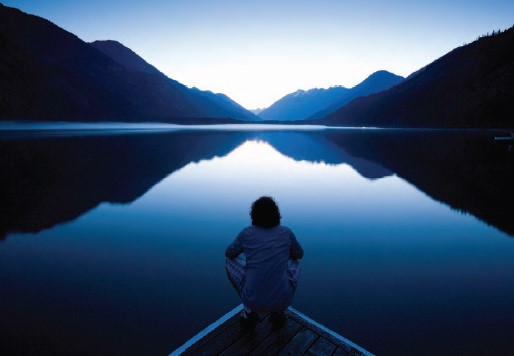 Kurutz, whose name and script reminds me a little too much of “Apocalypse Now,” intones: “In this chaotic world, McConaughey is telling us, find a moment to be still. Reflect. But don’t get so caught up in reflection that you cannot make a bold, blind leap of faith…into the water, toward the horizon…”
“Mr. McConaughey has been speaking his message long enough. His followers know it by heart. Now he has gone beyond words.”
It’s easy to make fun of such rubbish, but an awful lot of people, especially men, are literally buying into it.
What does it actually mean to be religious, and can there be a balance between the contemplative and active dimensions of human life?
To my mind, this question points to what being religious truly means: “Can the mind, which is so burdened with past memories and traditions, bring about the flame of change within itself and burn away the dross of yesterday?”
Doing that every day is art of meditation, which is the antithesis of and completely incompatible with “the art of the sell.” Materialism and marketing hold little interest for an authentically religious person.
To be religious doesn’t mean one doesn’t enjoy sex, or a beer (or bourbon). It involves taking one’s pleasures in moderation, and one’s pains with moxie. Too much pleasure, like too much pain, warps the human mind and heart.
To grow as a human being, one has to regularly end time, which entails undividedly and effortlessly observing thought into complete stillness. The mystery of being is when felt the familiar evaporates, and the world recedes into insignificance.
Then, being nothing, one can creatively reenter the world, or not, as one sees fit.
Personally, I prefer Rumi to McConaughey.
“Somehow comes emptiness,
this existence goes.
Praise to that happening, over and over!”
Martin LeFevre
AmericacaConcerning Grafts and Griftersdonald trumpEastern BuddhismgraftsgriftersMartin LeFevreMatthew McConaugheymeditationMeditationsnew agethoughts on lifeWestern Marketing
0 comment
0
Facebook Twitter Google + Pinterest

OU Senior Will Have mom At Graduation Thanks to University Commnity

AirBnB and Costa Rican Government to Work Together on Collecting Taxes?