Costa Rica News – The Colorado cyclist who went missing for nearly a day and a half during a mountain bike race in Costa Rica earlier this month is now back home in Colorado, recovering from his injuries.

Mark Lyons, 55, said he had been waiting years to go to Costa Rica to bike La Ruta de los Conquistadores, which is known as one of the toughest mountain bike races in the world.

But the adventure he faced ended up having little to do with cycling.

It was Thursday, Nov. 5, the first day of the race.

Mark was about seven or eight miles into about a 62-mile leg when the terrain got steep. 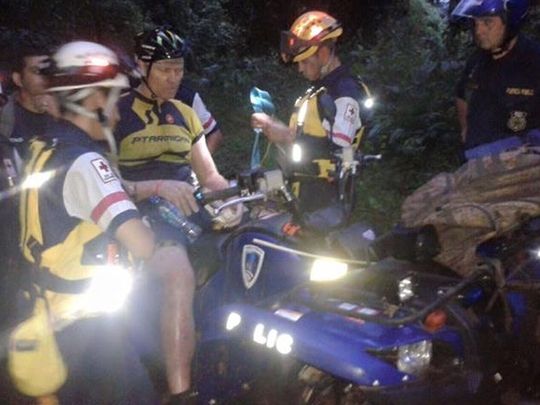 “People get off and walk, which most of the riding we do, we don’t walk, so, that’s kind of different,” he said. “I was very exhausted.”

Half the battle was dealing with an extremely muddy path, so he, like other cyclists, stopped at each creek or river they were forced to cross to clean off his bike.

“I get into the creek and start rinsing off my bike, trying to get the layers of mud off,” Lyons said. “So there was nobody on the other side that saw me. I was walking across with my bike. Just lost my footing. Slipped.”

Lyons called this the scariest part of everything that would happen next.

“I only held onto the bike a couple hundred yards,” he said. “Banging off the rocks, just pinballing as I made my way down the river. And just going under for long amounts of time. I’m not a water person like a lot of my friends, so that was pretty scary to me. That was really the only time throughout the whole event that I thought that I might not make it.”

But he did, coming to a rest onto a log after a ten minute ride downstream, thanks to a current at a fork in the river and a creek that pushed him to the water’s edge.

Exhausted, surprised — Lyons stayed in this spot in the water for about an hour and a half.

His shoes were swept away in the water, leaving only socks on his feet. He had no food or water.

The longtime cyclist knew he had to make his way up a steep embankment and hillside, especially because the water was rising.

“Finally, I just had to grunt, use all the energy I could to get myself out of the river,” he said. “I got up this hill. And then it started getting dark almost immediately.”

At that point, Lyons knew it was time to find a safe enough place to sleep.

“It was pitch black that night,” he said. “I could hear things in the trees around me. I know there’s snakes out there. I didn’t really think about that. Why worry about it? It’s not going to help me.”

And off to sleep he went, only to wake up the next morning more exhausted, but determined to find a way back.

As the sun came up, Lyons found himself deep in the Costa Rican rainforest.

He began climbing up the to the top of the hill and walking along the top of the ridge, but as heard the sound of the river growing more and more faint, he knew this wasn’t the right direction.

Lyons turned back, and said over the course of a five or six hour hike, he found himself back in the same spot he had exited the creek in.

Frustrated, he knew he would have to muster enough strength to go upstream and find the fork and walk the river back to the road he was cycling on.

“(I) couldn’t even lift my legs. There were vines six inches off the ground. I would lift my legs over at times,” he said. “It started getting dark again and then it just started pouring buckets.”

Lyons began making a bed of leaves, as he thought nightfall was approaching soon.

As he laid there in the pouring rain, he heard the sounds of vehicles in the distance.

Lyons said it took every last bit of energy he had to make his way back to the main road, where he was finally approached by rescuers.

He was taken to a local hospital with bruising, injured ribs and, unknowingly, a failing liver and kidneys.

“Toxins were being pushed out of my muscles,” Lyons said. “My kidneys were almost to failure. … I think that’s what shocked me the most. So the reality is, I really realized later how close I was to not making it.”

Lyons says he has just been able to start walking without assistance in the past couple of days, as he recovers comfortably at home with his wife.

He’s also quite modest about the entire ordeal.