Costa Rica News – If you are a Colombian taking a cruise that stops in Costa Rica, you might have to stay on the ship and catch some rays instead of visiting the country. 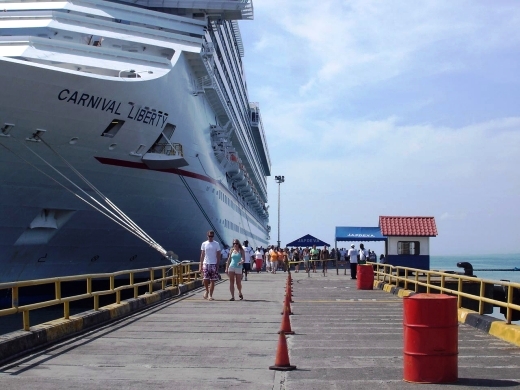 With the interest of the Government to attract more tourism in different regions of the country and from more tourists abroad, the immigration service announced that Colombians arriving at the Port of Limon on a cruise ship will not require a visa.

The director of the Dirección General de Migración y Extranjería, Gisela Yockchen, announced Friday that the visa free period begins on November 4 with the arrival of the first cruise ship and in force until May 2017.

With this temporary exemption, Colombian tourists on a cruise ship docking at Limon may enter Costa Rica for a few hours to a day (the typical dock time for cruise ships) without processing their visa and then will resume the trip.

The decision is stimulate the local economy. The Costa Rica Tourism Institute (ICT) estimates that some 1,000 Colombian tourists, each spending an average of US$100, from the Pullmantur will visit Limon during the cruise ship season.

To avoid that Colombians don’t use the cruise ship as a way of entering the country with the intent to remain, the director explained that the immigration service must receive at least five days ahead of arrival the list of names of Colombians who wish to visit (get off the ship) the port city. The time will be used by authorities to investigate backgrounds; and At the time of sailing if one or more persons has not reboarded, the cruise ship will not be able to continue on its journey.

The decision is expected to boost the local economy in the centre of Limon. The president if the Cámara de Comercio, Industrias y Turismo de Limón (local chamber of commerce), Rubén Acón, said that available for cruise ship tourists will be a City Tour service similar to that already running in San Jose.

No word yet if and when the exemption will apply to the Caldera and Puntareas ports.