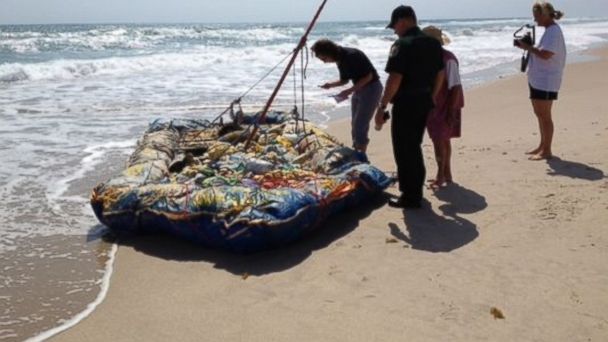 Steve and Shelby Crouse said they spotted the vessel while having coffee on their beach-front porch around 8 a.m. The homemade 18-foot raft had a wood frame and a metal mast, reading “Hecho in Cuba”, or made in Cuba. With the help of two other men, Steve Crouse brought it to shore, he told Florida Today.

That’s when the three discovered the contents on the vessel: 21 plastic bottles, 40 syringes and packs of medical tubing, labeled “MEDICUBA,” a child-sized shoe, a woman’s bra, a hairbrush, a Spanish-language Bible, a carton of apple juice, and a potato.

What wasn’t on the mysterious raft full of personal items? People.

That’s what led the Coast Guard, Brevard County Sheriff’s Department and Florida Fish and Wildlife Conservation Commission to search  the area by boat and helicopter for any possible occupants.

Lori Phatterplace from the Brevard County Sheriff’s Department said their efforts in the search are over. “We treated it as a person in the water protocol, but we never had any information that anyone was in the water.” Phatterplace told ABC News. “We haven’t located anyone from the raft.”

“We hope to God they made it,” Shelby Crouse told Florida Today. “Who knows if we’ll ever find out.”