The National Commission for Risk Prevention and Emergency Response (CNE) today declared a green alert for the rains that have occurred intermittently on the Caribbean slope and the eastern Central Valley. The alert activates the Emergency Municipal Committee of Paradise, for counting incidents and needs, and emergency care. 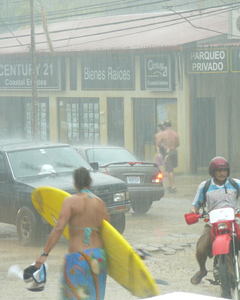 Indeed, the 911 system reported a sequence of calls from dawn on people that warned of the overflow of rivers in Paraiso in Cartago, caused by heavy rains of the night.

The Red Cross began operations and called her up personnel to meet the emergency; also set up a command post in Ujarrás.

River floods were reported watering, La Minita and surrounding areas where they had evacuated 10 people were housed in the homes of friends and family.

The western plains of St. Lucia also presented problems. The place came the CNE staff, who took the parish hall as a shelter for 10 families to move to the house were flooded.

Other points were affected Loria Street, The Banana sector and in the south of the old Color Cachito Center in Paraiso.

The water level reached one meter in some places, causing damage. Some structures were affected by currents of water that misrepresented, tore down fences or walls.

As for roads, stopped over on Route 10 between Cervantes and Turrialba, due to landslides that fell at the height of the entrance to Santiago. Also, a significant amount of material fell into the road linking with Tucurrique Cachí in Urasca, which interrupted the passage. The same happened in San Geronimo de Cachi.

The Ministry of Public Works and Transport should evaluate these routes and through the National Highway Council (Conavi) to reopen the steps.