Sports News – The Cavs were the luckiest team this week, at least during the Pre Draft Lottery. They had one of the worst records in the league and didn’t get a spot in the playoffs, but for the second time in three years, Cleveland won the annual Pre Draft lottery and secured the No. 1 pick in the next NBA draft, beating the odds and all expectations in the process. 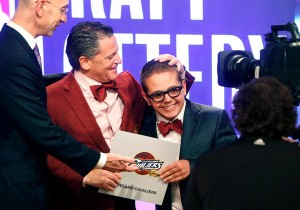 After closing the 2012-13 Season with the worst record in the league (20-62), the Orlando Magic entered the Lottery with 25% chances of securing the first pick, but ended up falling back one spot to No. 2. The Washington Wizards jumped from eighth to third in the lottery selection. Charlotte, which is planning to retake the Hornets moniker for next season, was the biggest loser in the lottery selection, falling from second to fourth place.  Meanwhile, the Phoenix Suns will get the fifth pick, followed by New Orleans, Sacramento, Detroit, Minnesota, Portland, Philadelphia, Oklahoma City, Dallas, and Utah.  Finally, the OKC Thunder will use Toronto’s pick as payment for a previous trade.

Winning the rights to the No. 1 pick in the 2013 NBA draft gives the Cavaliers the chance to bring new talent, rebuild their team and bounce back from three losing seasons following Lebron James’ departure to the Miami Heat. With James leading the team, the Cavs won the 2009 and 2010 Central Division Championships plus an Eastern Conference Championship in 2007. But since 2010 Cleveland dropped to the bottom of the league, winning only19 games in the 2010-11 season and setting a record for the biggest single-season drop in NBA history and the longest losing streak in league’s history (26-game).

The team lost a total of 63 games, including a 26-game losing streak that set an NBA record and tied the 1976–77 Tampa Bay Buccaneers for the longest losing streak in any U.S professional sport league. The following year, Cleveland finished the regular season with a 21 wins and 45 losses, improving their previous record and finishing in 13th place in the Eastern Conference.

The potential No. 1 pick this year, Kentucky freshman Nerlens Noel.  Guards Ben McLemore of Kansas and Trey Burke of Michigan, 2013 Big Ten and National Player of the year and Georgetown forward Otto Porter Jr. are also amongst the top prospects available this year.

Here’s the complete first-round order for the coming 2013 NBA Draft:

The Challenge of Neuroscience