World News – Well since Costa Rica is being taken over by China for all of you women out there that might want to be Miss Costa Rica do not find it odd if Costa Rica adopts this rule as well. Get out a ruler and measure the distance between your nipples. 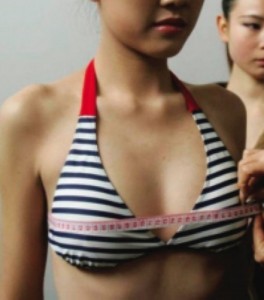 A Chinese beauty contest requiring candidates to have nipples spaced at least 20 centimetres (7.8 inches) apart sparked a storm of criticism on the Internet on Friday.

“Why more than 20 centimetres? I honestly don’t know who came up with these figures,” said a user on Weibo, China’s version of Twitter.

“How can beauty standards include breast distance? Do they take women as toys?” Judging women by such rigid criteria is so ‘out’!” said TV personality Yang Lan on the microblog.

The contest, aimed at crowning 10 university students in central Hubei province, drew from traditional Chinese and modern Western standards of beauty, a contest staff member was quoted as saying in the Global Times on Friday.

He added that contest organisers had conducted research on the Internet to determine the criteria.

In addition to considering traditional measurements like chest, waist and hips, the contest also said the space between candidates’ pupils should be 46 percent of the distance between their pupil and their ear.

China has hosted a slew of beauty pageants, including six Miss World contests, in the past nine years. Its candidate Yu Wenxia won the title when the international competition took place in northern China last month.

“These beauty contests are absurd,” said another Weibo user. “On what basis do these so-called judges use their own standards to measure beauty?”

Traveling by Car in Costa Rica – Tips and Advice