Trending Now
Costa Rican Journalist Awarded Pulitzer Prize
Virgin of the Angels to Protect Costa Rica?
Will Costa Ricans Be Evacuated from Wuhan?
Is Costa Rica’s Irazú Volcano Dangerous?
Cool Winds Expected in Costa Rica For Next...
Teddy Bear Heart
This Font Helps You Remember What You Read
Costa Rican Gives Her Advice About Touring France
New Species of Orchid Named for Costa Rican...
Guy Named Bud Weisser Arrested for Trespassing at...
Home TopicsBusiness Chinchilla Invites China to Invest in the Happiest Country in the World, What a Crock
BusinessUncategorized

Chinchilla Invites China to Invest in the Happiest Country in the World, What a Crock

Costa Rica News – Laura Chinchilla has ventured overseas to try to find in investors in the “Happiest Country in the World.”  After passing a law fining public drinking to hurt tourism even more in Costa Rica, Chinchilla is over seas promoting Costa Rica based on an index that is a crock of crap.  Hopefully the Chinese sees past the false advertising that the president is hiding behind. 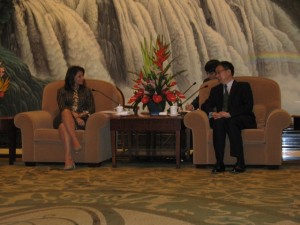 At the meeting held in a room at the Magnolia Hotel Jin Jiang Tower in Shanghai city, the president emphasized the opportunities offered by Costa Rica to develop business, among other reasons, quality of life for its inhabitants.

What she also probably did is tell them the benefits of coming here for large corporations which includes free electricity and tax shelters.  Ironic since the government owned Electricity company is going bankrupt and the fact that the Costa Rican government is disclosing private banking information to US citizens and businesses here.

“Costa Rica is an important place in terms of quality of life of its population, and various analyzes is that mark him as one of the happiest countries in the world, ie, a country that has driven the development of its population and harmony with their environment. This also represents a competitive advantage because we have skilled labor, “said the president. I myself would like to know where this skilled labor, oh yeah she means the foreigners that have come to work here and were not educated in the Costa Rican school system.

The forum was also attended by ministers of Foreign Trade and Tourism Anabel Gonzalez, Allan Flores, who presented details of the infrastructure, economy, education, geography, tourist attractions and even the climate of our country, all with the aim of expanding knowledge that Asians have of Costa Rica.

Later, the president held private meetings with some Chinese businessmen, though not released the names of the companies. Most likely telling them how they can corruptly get money out of Costa Rica with the help of the government.