Costa Rica News – How do I sign up to get a job with the Costa Rican government? Even after proving over and over again that they misappropriate funds on projects and give them to deputies and other officials in power, Chinchilla managed to scam another $8 Million from China.  I guess Laura and her band of bandits expects the Costa Rican population to believe that this was a gift because of the great relations she has made with China.  I am not as stupid and blind, this is either to allow the Asian countries to continue shark finning in Costa Rican waters or she did some other under the table deal to get this money.  You do not just give $8 million to a country and say use it how you want, especially with the track record of corruption with this regime in power. 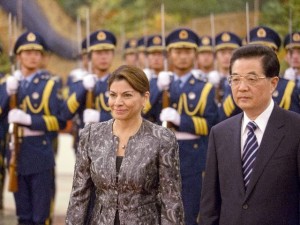 The Asian giant will donate $8 million to Costa Rica for the government to use in projects they decide, as agreed between the president of the Republic, Laura Chinchilla, and her host, Hu Jintao. Costa Rica should ask for full disclosure of where these funds are being spent.

This non-refundable financial contribution was not expected from cooperation agreements, but was well received by the president, who yesterday paraded on a red carpet and received military honors in the large open space above the rooms of the Palace of the People.

Prior to this meeting with Hu, Chinchilla had expressed opposition to come to China to ask for funds, but would always except donations.

The leaders signed eight cooperation agreements in areas such as health, infrastructure, education, security, agriculture, aviation and trade. In other words, Lady Laura just signed over Costa Rica to China.

China also gave a $25 million donation for the construction of the new National Police Academy in La Rita Pococí.

The new facility will be built with much of Chinese labor in the same condition as the National Stadium was built.

Welcome to Costa Rica, a territory of China.

This is payoff money 8 million will go into the pockets and be divided up among the PLN and other minister. Happy days. The dark side the hidden agenda Communist China has Costa Rica and it’s government in there back pocket. Shark Fin soup anyone! The trade agreement all slanted towards Communist China. Lady Laura giving free electricity to China’s business. 8 million given 100 million taken.