Costa Rica News – Let’s all be honest here. Costa Rica and Laura Chinchilla just sold the soul of Costa Rica.  The price tag was $1.5 Billion, but I guess we can add that to the running total which includes the national stadium. 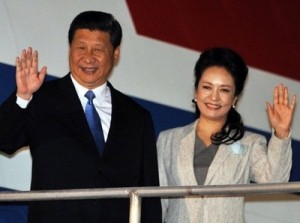 Costa Rica is the only Central American country that has diplomatic relations with China, the world’s second-largest economy, and has been rewarded with projects and visits by two sitting Chinese presidents since it first recognized the Asian giant over Taiwan in 2007.

The refinery, in Puerto Limon, is small and old and refines about 18,000 barrels of imported crude a day. The remodel could boost production to 65,000 barrels a day, with the Chinese sharing in the profits. Costa Rica sought help from China in updating the facility.

But the project is under debate as Costa Rican economists and politicians question the Chinese feasibility studies, and 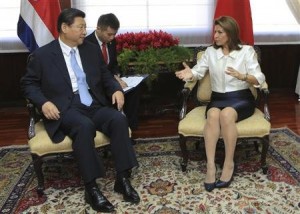 say the money would be better spent seeking alternative forms of energy.

Rene Castro, minister of environment and energy, said that the agreement only means having a line of credit available and that Costa Rica’s government still has asked state universities for analysis to determine whether the project is feasible.

The Chinese also ratified Costa Rica’s sanitary protocol to allow the export of pork to China, while the largest dairy business in the country, Dos Pinos, announced new exports of fresh and flavored milk.

Foreign Minister Enrique Castillo said Costa Rica will speed up the process for Chinese who already have visas from other countries, such as the U.S. and European Union, and will add people in the Beijing and Shanghai consulates to process paperwork quicker.

China has more than 100 million tourists traveling worldwide, Castillo said, noting that if Costa Rica could get 500,000 of them, it would boost tourism visits by 25 percent. Currently Chinese tourism to Costa Rica is very small because of visa problems.

But the Costa Rica government is making sure these tourists are pushed to the Pacific Coast of Costa Rica. If there is an oil spill they are not worried as it will only hurt the a coast filled with people that the leaders of Costa Rica with their racism have deemed unimportant.

But I am sure this president as well as some of the former presidents will have a nice retirement villa waiting after this term in office.  Bought and financed by China.

Ya think there’s a chance we can at least get some good chinese restaurants in Costa Rica. I’d like to see one that doesn’t serve white bread as an appetizer and Salsa Lizano as a condiment!!!

Good luck with that…..Salsa Lizano is not a Chinese condiment? lol

Actually I never new RECOPE refined, besides saying it in the name, I am almost sure Recope only distributes already processed fuels.

Sold?
All the “privileges” that China got in this deals -easy visas for example- are standard for many countries.
The access to the Chinese market to our milk production is “selling” the country?

You know, the US has many many more privileges than the ones are supposed to be given to China. And the US has never payed for them… they had simply take them.

It’s better to sell the country, than to just let it being robbed. So what is this “news” about? Are you any jealous?

“But the Costa Rica government is making sure these tourists are pushed to the Pacific Coast of Costa Rica. If there is an oil spill they are not worried as it will only hurt the a coast filled with people that the leaders of Costa Rica with their racism have deemed unimportant.”

Beyond the other blatant biased statements made in this particular article, this one is infuriating sensationalist, along with the title.

Is this what passes as a serious editorial nowadays?

You are right, there is no racism in Costa Rica and the people are the black Caribbean coast are treated great and well protected…..tell that to Jairo Mora Sandoval. Do you actually think that the CR government is going to do anything about that? The answer is no, they are too busy counting the money that Xi dropped in their accounts to continue to allow shark finning and gives them access to other natural resources in CR. But I guess I can go bury my head in the sand and pretend everything is just fine.