Ghosts & the Supernatural – Back in the 1920’s, Chicago was well known for its mob type activities as most people know about now. During those days in Chicago there was rampant violence against many innocent people just for being in the wrong place at the wrong time. The violence was not always against other mobsters but also against anyone that crossed their path or had anything to with that they thought could have been a scam that may take money away from them. This is a story of a young man by the name of Joseph that made a large mistake that he had to pay for with his life.

Today I received a photo that was taken at a local cemetery close to my friends home. She wanted an opinion as to what she thought she may be seeing within the photo so I asked her to send me an original copy, which she did. After looking over the photo I did not see the possible image that was being seen but I did find something new that caught my attention in the photo although it could also be a matrixing situation but it was also interesting enough for me to focus on.

After a complete review of the photo I noticed something that I can not prove its existence by any means but for some reason, because I have psychic abilities, I found myself being drawn into a landslide of psychic impressions that I felt is important enough to share with you in this article. I must first tell you the story of Joseph to help him as he has asked me too. I would like to say this, can I prove these impressions by historical research at this time, no I can not but these impressions came to me so strong that out of respect for this spirit I have a duty to tell you the reader.

As a psychic often times when I get impressions it comes in bits and pieces of information that have to be put together like a jigsaw puzzle before really making sense of it. As I talk about this spirit that communicated to me the following information I need to tell you that he gave me images of his death, his life, his family and his feelings. So please understand that because I am interpreting what I have seen I am repeating and writing what I was shown. Whether I interpret this information properly is my fault if I have mistaken something of the communication but I will share what I understand and know at this time.

Now I will tell you the story of Joseph, a young man who back in the 1922 worked small jobs for any money he could make to support his mother who was a widow.

Joseph showed me a small apartment in what most people call “Little Italy”.

These people were not rich by any means, and lived in the poorer side of this area. He communicated through images to me that he became frustrated with just getting by and wanted to make some big bucks fast. He showed me images of his little mother who if you were to imagine a small Italian woman she would have definitely fit the bill so to speak. Next he showed me images of what looked to be him working with some unsavory characters manufacturing bootleg liquor and the transportation of that liquor. He showed me the number 4 which I am assuming or usually means a time frame of some kind that he worked for these people. I saw images of money changing hands which to me means he had contact with this money and that is where the twist in the story becomes somewhat confusing because he communicated a somewhat jump forward into his future.

The next thing he showed me was a car that typically looked like one out of a gangster movie that you might see on TV. I then felt a sharp pain in my head that for me is not unusual when a spirit is trying to communicate what was happening to them at the time. It meant there was an obvious connection to the car somehow. He also showed me a gun right after the pain in my head so I am interpreting that he was hit over the head with it. The next image I received was of two very large men dressed in suits dragging his body from the back seat of the car and dropping it on the ground.

The images get a bit fuzzy but as I saw it there were ropes around Josephs body tightly wrapped. After many years of interpreting these types of images I assumed these men did not want him to get away. I began to get specific with the questions I was communicating to him, I asked Joseph, “Who were these men”? He showed me an image of Al Capone and to me that meant that they were with the Chicago Mob that is so famous from that area of the times. Although I did not get the feeling they were connected to Al Capone it was a good way for him to tell me about these men.

My biggest concern at that point was being able to get the story of his death completely so I then began to ask him even more questions. He told me that he was tightly wrapped in the 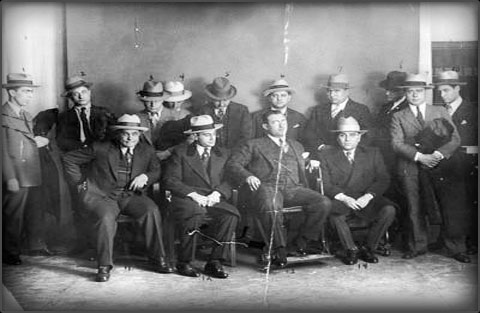 ropes as they dragged his body through a cemetery by showing me gravestones sticking up all around him. Although these types of images were somewhat rare for me to receive it was if I was looking through his eyes while being drug across the ground. I then saw water that looked like a lake or pond. Some very clear images of these two men and their violent actions against this young man was being communicated to me. They were weighting Josephs body down by tying rocks or some other bulky items to him and sealing his mouth shut with something, I guess tape. Next I saw them throwing his wriggling body into the water which I can only assume that Joseph was murdered by them drowning him. Now that I have told you of what I was given as impressions by this young spirit I will give you my final interpretation of Josephs, life, murder and about his emotions during this communication.

In 1922, a young man of approximately 23 years of age by the name of Joseph Manzano (one possible spelling of last name) who appeared to me as a nice looking young man with short dark hair, clean cut with his hair parted on the side.

He wore a long sleeve whiteish looking shirt and brown slacks with a belt, clothes of the times. He was approximately 5’9” in height with a slim muscular build. He lived in “Little Italy” in Chicago in a small apartment with is mother, a small Italian woman and Joseph worked odd jobs to take care of her. After never really succeeding at any one job he became frustrated and began to work for some unsavory characters that dealt in bootleg liquor selling it to the Speakeasy establishments of Chicago. They made him a delivery person for this liquor gathering money as he made the deliveries. He began to skim money off the top to make extra money without the realization that it was a mob operation. Once it was discovered as to what he was doing the two men showed up one day at the bootleg warehouse where he worked.

They grabbed him, then hit him over the head with the gun they had and shoved his body in the back of the car onto the floor to conceal him from any onlookers. They drove him out to this cemetery drug his tightly wrapped body out of the car onto the ground where he landed with a thud stirring him back to consciousness. They tied his mouth with cloth or tape so he could not scream and began dragging him to the water on the back side of the cemetery where they weighted his body down and tossed him into the deep water to drown and thus is the untold story of what happened to young Joseph Manzano.

As Joseph communicated with me the emotions he conveyed to me were ones of sadness and great regret. He conveyed to me how he did not mean to leave his mother, she never knew what happened to me he said, The police could never find any sign of him so they assumed he had left Chicago. As I sat here receiving his messages he begged me to help him many times to tell his untold story to who ever would listen. This made my decision to write this article an easy one.

He seemed to be have a gentle soul with great remorse for his life. This young man disserves some type of closure so he may move on. His young restless soul wanders this cemetery in search of peace and freedom from the torment of his death. I hope by me writing this article that maybe he can now move on to the light where he will find happiness again but most of all so that he is able to be with his mother and hold her once more.

In the very near future I will be making a trip to this cemetery with some friend of mine and I hope I will not find Joseph still locked to these grounds in perpetual torment. I am not here to prove this story but to convey to you the reader my impressions of this young spirit who needed my help and I have now upheld my promise to him and that is all I am here to do.